In many professions, written and unwritten rules preclude the consumption of alcohol if there is a chance of being called to work. Few people would be happy to know that the pilot of their plane spent the two hours preceding their flight drinking alcoholic beverages in a bar. Similarly, few people would want their doctor to drink beverage alcohol just prior to starting a rotation. This week the DRAM reviews research by Ahmad, Wallace, Peterman, & Desbiens (2002) that investigated doctors’ attitudes about drinking alcohol while on call.

Ahmad et al. (2002), using a list provided by the American Medical Association of practicing physicians in Hamilton County, Tennessee, randomly selected 20% of doctors in each listed specialty. Investigators mailed surveys to 206 doctors in the area; 135 (65%) responded. The survey consisted of 10 statements about doctor’s attitudes toward drinking alcohol while on-call. Researchers asked the participants to agree or disagree with these statements.

Table 1: Proportion of doctors who agreed with alcohol and work statements (adapted from Ahmad et al., 2002) 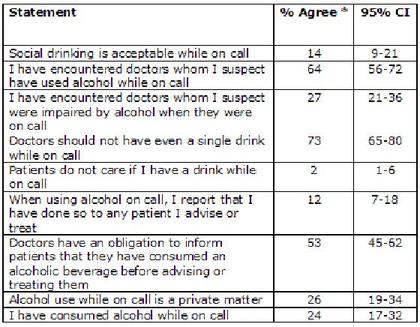 As Table 1 summarizes, most doctors find drinking unacceptable while on call. Interestingly, most doctors also know of another doctor whom they suspect used alcohol while on call and almost a quarter of the doctors reported that they consumed alcohol while on call. Though these results raise concern about doctors’ drinking habits, some methodological limitations exist. For example, the authors conducted the study in a relatively narrow geographic region, which limits our ability to generalize the results beyond the current sample. Furthermore, Ahmad et al. (2002) note that the people who responded to the survey differed in a number of ways from those who did not respond: surgeons and pediatricians were more likely to be respondents (49/135 (36%)) than non- respondents  (17/71 (24%)), females were more likely to be non-respondents (18/71 (25%)) than respondents (22/135 (16%)), and doctors of internal medicine were more likely to be non-respondents (22/71 (31%)) than respondents (23/135 (17%)). Results of surveys of sensitive issues, such as drinking, tend to be biased because people without problems are often more likely to report these issues than people with problems. The disparate proportions of respondents in this sample might not be representative of the target population. A larger sample size, with more consistent response rates, is necessary to more accurately represent physician attitudes toward alcohol consumption.

This study raises a number of important issues regarding the ethics of alcohol use among physicians and, by extension, other professionals. Though common sense might suggest that a physician should never be under the influence of alcohol while on call, this study revealed that one fourth of all physicians polled did not preclude drinking while on call; further, one fourth of the physicians surveyed reported drinking on call. These findings suggest the need for a greater education and awareness training for physicians to ensure that patients receive the best possible care.

Posted at 04:44 PM in The Drinking Report for Addiction Medicine (DRAM) | Permalink