Dram, Volume 1(3) - One Zygote or Two? Understanding the Influence of Genes and Environment use, and problematic use. on Adolescent Substance Use Behavior

For decades, scientists have debated whether risky behavior is the result of nature (i.e., genetics and/or other biological factors), or nurture (i.e., environment). Though scientists now agree the interaction of these two factors influences behavior, they still have to determine how much and in what way these causes work. This week the DRAM reviews research by Rhee, Hewitt, Young, Corley, Crowley, and Stallings (2003) that estimated the relative contribution of genes and environment to adolescent substance use behaviors. To address this question, researchers compared different types of twins and other siblings whose genetic and environmental similarity is known.

Rhee et al. (2003) recruited 345 monozygotic (MZ) twins, 337 dizygotic (DZ) twins, 306 pairs of biological siblings, and 74 sets of adoptive siblings. All study participants were between ages 12 and 19; the mean age was 15.9. Participants answered select questions from the Monitoring the Future survey (Johnston, O'Malley, & Bachman, 2001) and completed the substance abuse module of the Composite International Diagnostic Interview (CIDI-SAM; Robins, Cottler, & Babor, 1995) to report on substance use initiation, substance use, and problematic substance use. Authors controlled for sex and age in their analyses.

The authors compared the full model to several other models that used some, but not all of the above sources of variability (e.g., ACTE or ADE) to determine which model best explained adolescents’ reports of substance initiation, use, and problematic use.

Table 1: Best fit models for initiation, use, and problem use of any drug (adapted from Rhee et al., 2003) 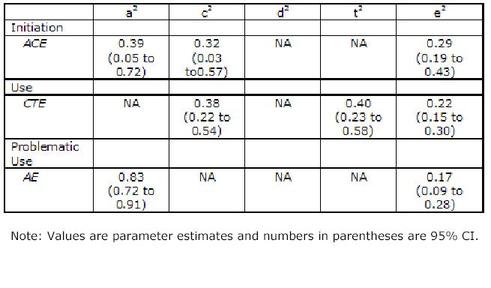 Because the base rates of specific drug use (e.g., marijuana use) were low, the study had to combine marijuana, alcohol, and tobacco into one category, limiting the specificity and generalizability of the results. Also, the authors report the central values of the proportion of the total explained variance attributable to influences; however, the report does not report the size of the explained variance so the full extent to which these influences explain behaviors remains unclear.

Nonetheless, this research is worthy of attention: Rhee et al. (2003) point out that genetic and environmental influences vary depending on the specific substance use behavior under consideration, suggesting that genes might have the most impact on problematic substance use whereas environmental factors play a larger role during initiation and use. This distinction is very important to consider with respect to the development of interventions and preventions for adolescent substance use and abuse. Researchers and prevention specialists might uncover strategies that can specifically deal with genetic or environmental influences at different levels of substance using behavior. If Rhee et al.’s (2003) findings are correct, primary prevention programs disseminated through community public health programs are particularly important to stop the problem before it begins. Similarly, if genetic influences are the largest influence on problematic substance use, then it is even more important to limit use before it becomes problematic. Finally, these results suggest that once substance misuse emerges, given the larger influence of genetics, a panoply of interventions (e.g., medications, cognitive behavioral treatments, community reinforcement, family support, etc.) is likely to be required for effective treatment.

Posted at 09:31 AM in The Drinking Report for Addiction Medicine (DRAM) | Permalink