The Dram, Volume 1(5) - Sober on the Issue of the Cardiovascular Benefits of Moderate Drinking

Scientists have argued that moderate involvement with what some might perceive to be “sinful” behaviors, such as eating chocolate, might provide individuals some health benefits. Similarly, some have argued that drinking alcohol moderately provides protection against cardiovascular disease (CVD). After an original period of skeptism, many people and the media have accepted such possibilities with enthusiasm. However, a recent study (Naimi, Brown et al. 2005) suggests that the improved cardiovascular health of moderate drinkers compared to non-drinkers might be the result of better social, behavioral and health conditions rather than moderate alcohol consumption. In this issue of the DRAM, we review that study and the factors that might confound the perceived relationship between moderate drinking and risk of CVD.

Figure I summarizes factors that tend to be more prevalent among non-drinkers than moderate drinkers. For example, the study found that, compared to moderate drinkers, non-drinkers tend to have less leisure time, insufficient physical activity and they tend to be smokers. The study found that nondrinkers as a group had less healthy measures on 27 of the 30 CVD-related risk factors or confounders. 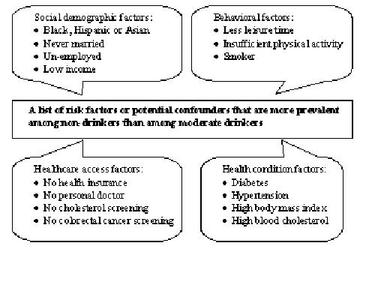 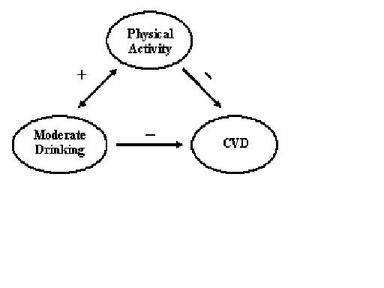 The moderate drinking recommendation suggested by the U.S. Department of Agriculture and the U.S. Department of Health and Human Services (U.S. Department of Agriculture & U.S. Department of Health and Human Services, 1990) limits alcohol consumption to no more than two drinks per day for men and one drink per day for women; this recommendation should be cautiously promoted regarding its benefits of CVD. The results of this study suggest that clinicians and policy makers avoid undue efforts to either promote or curb alcohol consumption as a function of its capacity to influence the risk of CVD. Naimi et al. recommend that future investigations seek to control potential confounding variables through the use of randomized trials. Furthermore, they suggest that due to relatively small beneficial effect of moderate drinking as compared to the mortality and morbidity that excessive drinking can cause, caution is called for when disseminating to the public the notion that moderate drinking has health benefits.

What do you think?  Comments can be addressed to Ziming Xuan.

Posted at 09:47 AM in The Drinking Report for Addiction Medicine (DRAM) | Permalink