The Dram, Volume 1(6) - First Drinks and Follow-ups: The age of drinking onset is important for adult drinking patterns

Though the legal drinking age in the United States is 21, adolescents and young adults often begin drinking long before they reach legal drinking age. This trend has been observed in countries worldwide, in general, and in Finland more specifically (Pitkänen, Lyyra, & Pulkkinen, 2005), where the legal drinking age is 18. Previous studies have found that heavy drinking in adolescence is a predictor of a problematic relationship to alcohol later in life (Ghodsian & Power, 1987). This week DRAM reviews a study by Pitkänen, Lyyra, and Pulkkinen (2005) that investigates the impact of the age at which a person starts drinking on the frequency and amount of alcohol a person drinks as an adult.

The participants for this study were selected from the Finnish Jyväskylä Longitudinal Study of Personality and Social Development (JYLS) conducted by Lea Pulkkinen. JYLS includes data from 12 complete school classes of secondgrade students (369 students total; 173 girls and 196 boys), who were living in the town of Jyväskylä during 1968. Trained interviewers examined and administered questionnaires to these students at ages 14, 20, 27, 36, and 42 about their use of alcohol.** Pitkänen et al. defined onset age of drinking as the age at which a participant reported to first starting to drink occasionally or had been drunk. The Life Situation Questionnaire, sent by mail at ages 27, 36,  and 42, asked participants a variety of questions regarding their drinking habits, including estimates of drinks per drinking day, and number of drinking days per year. The authors defined frequency of drinking as the number of drinking days per year, and defined binge drinking as the estimated number of times the participants reported being drunk in the past year after drinking at least 5 drinks on one occasion. For all measures in the analyses of age of onset and drinking behavior, information was available for 83.5% of the original sample (308 people); age of onset data were available for 96.5% of the original sample (356 people) and information regarding use of alcohol was available for 89.7% of the original sample (331 people).

The mean onset age of drinking was 15.5 years (range: 10-30 years; SD 2.4); this did not vary significantly between sexes. For both men and women, age of onset was inversely related to frequency of alcohol use and binge drinking; that is, those who started drinking at age 13 or younger drank more frequently and binged more often than those who began drinking at 14 or later. Pitkänen et al. used multivariate analysis of variance (MANOVA) to determine the main effects of age of onset and sex on frequency of drinking and binge drinking. They found that men drank more frequently, and binge drank more often than women. However, the authors found no significant difference between sexes in the relationships between age of onset and the adult drinking measures and chose to conduct MANOVA tests
separately for males and females. The mean adult drinking behaviors by age at drinking onset presented in Table 1 demonstrate that both males and females who start drinking at a younger age drink more often later in life and are more likely to binge drink. The levels of drinking are higher for men than women. However, the effect of early onset is more pronounced for females. Males in the youngest category of age at onset, on average, drank 1.9 times as many days in the last year and 1.8 times as many binge drank than males in the oldest category. For females, the ratios of the means between youngest and oldest onset age groups were 2.3 for days drank and 2.7 for binging.

Table 1: Mean differences in adult alcohol use (at age 36/42) by age of onset of drinking and gender (adapted from Pitkänen et al., 2005) 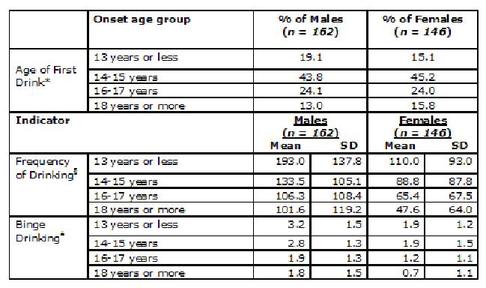 * Measured by % of participants
§ Measured by approximate number of drinking days per year
±Scoring for Binge Drinking: 0 = not at all; 1 = once per year; 2 = less often than once per month; 3 = one to three times per month; 4 = once per week; 5 = several times per week.

There are several strengths to this study, including the longitudinal design, inclusion of both males and females in a socio-demographically representative sample, high retention rate, and use of several different indicators to measure alcohol use. Interviews and surveys collected information about current alcohol use as well as past drinking. The results of this study suggest that early onset of alcohol use is a significant predictor of alcohol abuse during adulthood; however, it remains unclear whether this is a matter of absolute age, a defiance of norms, or a variety of other things such as parental approval or access to alcohol. Further research might try to determine which of these issues is the primary influence for this pattern of drinking. In other words, if the legal drinking age were 15 or 21, would this pattern still emerge?

** Data regarding adult alcohol use is based on responses at age 42 for all participants except for 47 who could not be reached and 25 for whom there was missing information at aged 42; in these instances information collected at age 36 was used instead. For the present study 90% of the participants were followed from ages 8 to 36 or 42; complete data on age of onset and adult alcohol use were available for 84% of the original random sample.

Posted at 10:36 AM in The Drinking Report for Addiction Medicine (DRAM) | Permalink