Alcohol use disorders and hazardous drinking increase a person’s risk of developing a variety of illnesses, injuries, and diseases, and contribute to public health threats such as drunk driving (Rehm, Gmel, Sempos, & Trevisan, 2002). There are approximately 17.6 million people in the U.S. who abuse or are dependent on alcohol (Grant et al., 2004). Unfortunately, many of these cases go undetected because there are few situations in which time permits completion of the elaborate screening currently available. Even brief instruments such as the CAGE (4 items) or the AUDIT (10 items) are under-utilized because of their length. Consequences of alcohol use might lead drinkers to seek medical help more often than non-drinkers, and thus medical settings provide an important opportunity to screen for alcohol problems. This week The DRAM reviews a recent study by Canagasaby & Vinson (2005) that assesses the efficacy of individual alcohol screening questions in identifying current alcohol use disorders or recent hazardous drinking.

A total of 2,688 participants were recruited from emergency departments (ER) of three hospitals in Columbia, MO between February 1998 and March 2000: 1,537 sought care for an acute injury and 1,151 for a medical illness. Eighty-seven percent of patients admitted for an acute injury agreed to participate, as did 88% of those admitted for medical illness. The researchers also included an additional group comprised of 1,112 residents of Boone County and adjacent counties recruited by random digit dialing; 47% of those contacted agreed to participate.1 Only participants who reported having at least six drinks in the last year completed a full interview.

As part of a structured interview, participants answered a single alcohol screening question (SASQ) “When was the last time you had more than X [4 for women; 5 for men] drinks in one day,” They also reported on their drinking habits in the past 28 days (8 days for the medical control group) using the timeline follow-back model (Sobell & Sobell, 1992), and answered questions from the structured diagnostic interview schedule (DIS) (Robins, Cottler, Bucholz, & Compton, 1996), two of which were alcohol consumption quantity (Q) and frequency (F) items. For analysis, alcohol abuse and dependence were defined based on DSM-IV criteria (American Psychiatric Association, 1994) and identified using answers from the DIS; hazardous drinking was defined as >4 drinks in one day or >14 drinks in one week for men and >3 drinks in one day or >7 drinks in one week for women (National Institute on Alcohol Abuse and Alcoholism, 2003), as reported using the timeline follow back. Canagasaby and Vinson compared the ability to predict hazardous drinking and alcohol use disorders of (1) the SASQ alone, (2) the quantity question (Q) alone, and (3) the QF product, which was calculated by multiplying answers to the quantity (Q) and frequency (F) questions. Analyses evaluated the sensitivity (i.e., how accurately the screen identified people who actually had a problem) and specificity (i.e., how accurately the screen identified people who did not have a problem) of each of the screening tools in classifying participants as hazardous or disordered drinkers. Table 1 shows the sensitivity and specificity of each screen at possible cut points.

Table 1: Sensitivities and specificities in identifying problem alcohol use (adapted from Canagasaby & Vinson, 2005) 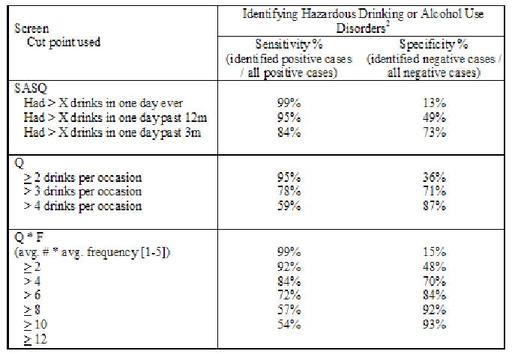 The SASQ is “When was the last time you had more than X drinks in one day?” where X = 4 drinks for women and 5 for men. Q*F is the product of the usual frequency of drinking (using a 5-point scale) and average amount consumed (based on measurement of standard drinks).

One limitation of this study is the sequence of the interview. The SASQ question preceded all other questions, but both the quantity and frequency items followed the detailed timeline follow-back section of the interview. This creates two problems. First, the efficacy of the quantity and frequency items in predicting hazardous drinking might be greater than the SASQ because participants were able to answer more accurately after having gone through the day by day recall. Secondly, because the quantity and frequency items followed other items, we cannot determine their efficacy when asked independently of those other items. Another limitation of the study findings is the lack of specificity at high levels of sensitivity for these screens. It is very important that a screen has high sensitivity (i.e., picks up true cases of the disorder for which it screens). However, Canagasaby and Vinson’s results show that at their highest sensitivity, their screening items are identifying between 66% (Q) and 85% (SASQ and Q*F) of people without problems as having problems. Screening questions are used to reduce the number of people who are administered more definitive, and time consuming, diagnostic instruments. If the screening indicates that most people need further evaluation the brevity of the screen loses its importance.

Despite these limitations, the results of this study suggest that a single or two item measure is an acceptable way to screen for problem drinking, especially hazardous drinking. The high sensitivity and lower specificity of all three screens suggests that clients who screen positive ought to be followed up with more detailed questions, such as the full 10-question AUDIT questionnaire, to confirm their alcohol problems. Implementing brief screenings as a first gate could have a major impact on diagnosis of hazardous drinking or alcohol abuse or dependence, making it much easier to identify those who might be struggling with these problems and suffering adverse consequences as a result. However, it is also important to further research other barriers to alcohol screening in medical settings, such as insurance regulations that deny payment for alcohol-related accidents. Opening the lines of communication regarding alcohol-related problems in a medical setting, and providing resources for potential treatments and/or referrals to self-help groups, might ensure that fewer cases of alcohol abuse or dependence go untreated.

1. Those who sought care for an acute injury were recruited to be part of the experimental group (under the assumption that people who drink heavily or have alcohol problems are more likely to present with injuries than those who do not), while those who sought care for a medical illness and the telephone sample were recruited as control groups. Though hazardous drinking was higher in the experimental group, because the groups were matched demographically and findings were similar in all three groups, we report the combined results in this review.

2. The authors did not provide information on sensitivity and specificity for hazardous drinking and alcohol use disorders separately.

Posted at 10:50 AM in The Drinking Report for Addiction Medicine (DRAM) | Permalink