STASH Vol. 2(2) - Is There a Dangerous Epidemic of Crystal Meth Use Spreading Across the United States?

Methamphetamine, also referred to as “crystal meth,” “meth,” “ice,” “crank” or “glass,” is a fast acting and short-lasting nervous system stimulant. Users experience brief feelings of euphoria and, because of the energizing effects of the drug, can go for many hours or days at a time without sleep or food when on a “meth run.” Chronic stimulant use is associated with euphoria, dysphoria, and paranoia with increasing doses and continued use. In addition, regular users can experience hallucinations and unpredictably violent behavior that is directed toward themselves or others. Withdrawal symptoms include severe depression, lethargy, loss of pleasurable feelings, and anxiety (Office of National Drug Control Policy, 2003). Because it is a vasoconstrictor, methamphetamine was used originally in nasal decongestants, and bronchial inhalers. Methamphetamine use also reduces appetite; consequently, it was used to treat obesity. As part of the U.S. Drug Abuse and Regulation Control Act of 1970 in response to illegal trafficking in the 1950s and 1960s, methamphetamine was outlawed (Center for Substance Abuse Research, 2005). Recently, the popular press has paid increasing attention to methamphetamine use as a threat to public health. This week STASH reviews some of those press claims and some scientific evidence about the current patterns of meth use across the United States.

Many popular press articles, such as the feature story “America’s Most Dangerous Drug” in Newsweek (August 8, 2005), show dramatic photographs of users before and after their addiction to methamphetamine. The after photographs typically show the users’ extreme physical deterioration including lost teeth (i.e., “meth mouth”). A recent front page article of the New York Times (June 11, 2005) featured an article on “meth mouth.” However, scientists have voiced outrage over the reporting of so-called “meth mouth” and other myths about methamphetamine use, arguing that the existence of these phenomena is based on anecdotes and misinformation rather than scientific evidence (Lewis, 2005). In fact, some scientists suggest that poor hygiene and smoking cigarettes are the most likely culprits of tooth loss for methamphetamine users (Shafer, 2005).

Scientific data suggests meth use also is not as prevalent as many media stories imply. The National Survey of Drug Use and Health (NSDUH), an annual household survey of illegal drug use for 70,000 individuals in the United States general population age 12 and older, reported that 4% of the general population used methamphetamine during their lifetime, 0.6% had used it in the past year and 0.2% had used it during the past month (Substance Abuse and Mental Health Services Administration, 2004). The number of past-year and past-month users did not change significantly between 2002 and 2004.

The NSDUH also indicates that meth use might not be as prevalent as other drug use and might be distributed inconsistently across geographical areas. Across the United States, average levels of other drug use, such as marijuana (10.6%), prescription pain relievers used non-medically (4.7%), cocaine (2.4%), tranquilizers (2.1%) and hallucinogens (1.6%), are higher than the average use of methamphetamine (0.6%). Further, NSDUH data show that past-year methamphetamine use is more common in the western United States and in rural and small metropolitan areas. Data measuring treatment admissions and criminal activity also indicates more use of methamphetamine in the western United States. According to data from the Arrestee Drug Abuse Monitoring program and the Drug Use Forecasting Annual Report, more adult arrestees’ urine samples at Drug Use Forcasting sites in the western United States test positive for methamphetamines than in other regions of the country. San Diego (30.6%), Phoenix (19.5%), San Jose (16.3%) and Portland (15.2%) had the highest percentage of arrestees test positive (Center for Substance Abuse Research, 2005). According to data from Treatment Episode Data Set (TEDS), more than three quarters the 13 most western states had higher rates of treatment admissions for methamphetamines than for cocaine or heroin related treatment admissions (Substance Abuse and Mental Health Services Administration, 2002). However, it is important to keep in mind that treatment admissions is not a direct measure of use since a number of other factors (i.e. media coverage, awareness, treatment availability, etc.) can influence met-demand for treatment . 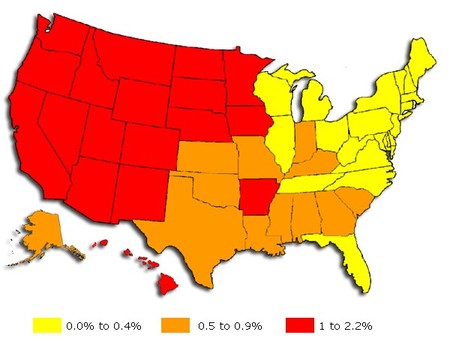 There is a down side and an up side to the media being hyperbolic about meth use. For example, the down side is that people will stop believing the media and authorities about the risks of meth use if they don’t see what others are complaining about. Meth use does pose significant dangers to health. On the other hand, increased attention to meth use is provoking efforts to thwart its use. These efforts have the potential to improve public health. Recent legislation has imposed tighter restrictions on chemicals used in the production of methamphetamine (e.g., ephedrine, pseudoephedrine, and phenylpropanolamine) and stricter penalties for trafficking and manufacturing of methamphetamine. In addition, researches and clinicians are focusing on improving methamphetamine treatment efforts Aside from antidepressant medication, there are no pharmacologic treatments for methamphetamine withdrawal.

Meth abuse treatment is based on cognitive behavioral therapy to modify expectancies and increase user's ability to cope with stress. According to the Bureau of Justice Assistance, drug courts can be a useful way to monitor methamphetamine offenders in some communities. These drug courts are ideal settings to implement long-term, evidence-based treatments because they monitor clients closely over time (Center for Substance Abuse Research, 2005). Scientific research should inform the development and implementation of primary, secondary and tertiary strategies to prevent illicit use and distribution of methamphetamines.

Posted at 02:40 PM in Science Threads on Addiction, Substance Use, and Health (STASH) | Permalink

Plan a relapse prevention program and it should be your new year resolution. This can include employment issues, family environment, social environment, your medical and mental health needs, housing needs and any legal and educational proceedings required. You have to determine what you need, such as
Nutritional plans, Medication management, Follow up therapy and psychiatric appointments etc.