Posted at 10:39 AM in The Worldwide Addiction Gambling Education Report (The WAGER) | Permalink | Comments (0) | TrackBack (0)

STASH Vol. 2(3) - One more cup for mom and one for baby: Some women struggle to stop caffeine use while pregnant

Adults and children widely consume caffeine through a variety of foods and beverages. The average adult caffeine consumer in the United States takes in approximately 280 mg of caffeine every day, the equivalent of three 6-oz. cups of coffee or five 16-oz. bottles of cola (Barone & Roberts, 1996; Griffiths, Juliano, & Chausmer, 2003). When compared to other drugs caffeine is a relatively safe substance. However, caffeine can occasionally create serious health problems. For example, consumption of caffeine during pregnancy has been associated with a variety of adverse consequences, including spontaneous abortion, and low birth-weight (Eskenazi, 1999). Physicians generally recommend... Read more → The media often portrays drug use, and television is no exception to this inclination(Strauss, 2005). Popular examples of television programs that depict marijuana use are Entourage and Desperate Housewives (Strauss, 2005). Showtime’s new show Weeds focuses on Nancy Botwin, a pot-dealing suburban mother. This critically acclaimed dramedy has already garnered a Golden Globe for Mary-Louise Parker’s portrayal of Nancy. The show also has created controversy because of claims that it glorifies drug use. The popularity of programs depicting substance use requires an examination of their themes and the potential impact on the public. This week, Addictions and the Humanities discusses... Read more →

Tobacco use is the second leading cause of death worldwide. Researchers estimate the annual global mortality rate due to tobacco-related disease will double by the year 2020 (i.e., from 5 million deaths per year to 10 million deaths per year) (Peto, Lopez, Boreham, Thun, & Heath, 1994). These numbers are particularly troubling since tobacco use is an acquired behavior and a preventable cause of death. This week, ASHES reviews an article on tobacco use among teenage girls and boys worldwide (Warren, Jones, Erikson, & Asma, 2006) and the implications that these findings have for future chronic disease burden and the... Read more → 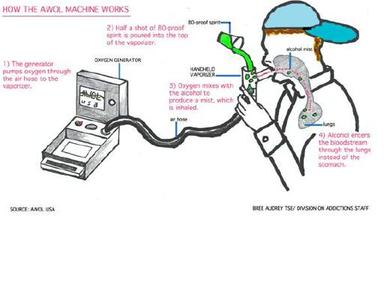 There are countless types of alcoholic beverages on the market, varying in taste, proof, flavor, and more. Due to various scientific studies, we know the impact that these alcoholic beverages have on the body and on health. Recently, a new process of ingesting alcohol, called Alcohol Without Liquid (AWOL), was introduced in the U.S. AWOL allows consumers to orally inhale oxygenated liquor (i.e., distilled spirits) to experience an alleged “euphoric high” (AWOLUSA, 2004). However, researchers have not subjected AWOL to rigorous scientific study. We do not know the effects of this new inhaled route of administration for alcohol on the... Read more →