The Dram, Volume 2(3) - Are Medications to Treat Alcohol Dependence Effective?

According to epidemiologic research, alcohol dependence affects approximately 10% of the U.S. population at some point in their lives, with more men affected than women (Grant, 1997). Treatment for acute withdrawal from alcohol dependence, and maintenance of long-term sobriety traditionally has consisted of psychosocial interventions (e.g., Alcoholics Anonymous, various counseling and psychotherapy approaches) and pharmacologic treatments (used alone or in combination with psychosocial interventions). Given the pressing need to prevent and reduce the prevalence of alcohol dependence, researchers have explored the use of different pharmacologic treatments. This week, The DRAM summarizes findings of the University of North Carolina (UNC) Chapel Hill Evidence-based Practice Center’s systematic review of the efficacy of 5 categories of drugs to treat alcohol dependence (Garbutt, West, Carey, Lohr, & Crews, 1999).

The UNC systematic review consisted of a detailed search about five classes of drugs used to treat alcohol dependence: Disulfiram, Naltrexone/Nalmefene, Acamprosate, Serotonergic agents, and Lithium. The authors conducted literature searches using MEDLINE, EMBASE and specialized databases, searched bibliographies of review articles, and interviewed investigators in the field. Table 1 shows Inclusion/Exclusion criteria for studies in the systematic review. For each included study, the authors abstracted information about each of the following study attributes: (1) study design; (2) diagnostic tools and assessment; (3) drug interventions and other interventions; (4) patient characteristics (i.e., demographics, mental health, compliance); (5) numerous outcome measures (e.g., relapse, return to drinking, drinking or nondrinking days, time to first drink, alcohol consumed per unit of time, craving). The authors also rated each article included in the review for quality (i.e., quality scale ranging between 0-100) and strength of evidence for each drug class (i.e., A, strong and consistent evidence of efficacy of studies of large size and/or high quality; B, mixed evidence of efficacy; C, evidence of lack of efficacy; and I, insufficient evidence). 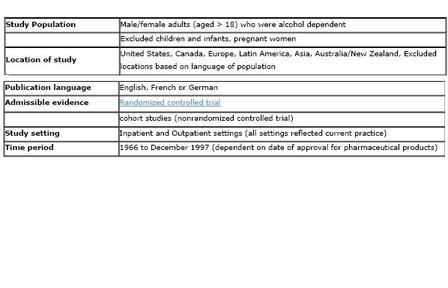 The authors evaluated 375 articles; they abstracted and analyzed data from 41 studies and 11 follow-up or subgroup studies that fit the inclusion criteria for the systematic review. Table 2 shows the grade for strength of evidence for each of the pharmacotherapies evaluated. The authors note that although Naltrexone (grade A) and Acomprosate (grade A) both showed promising effects for reducing the frequency of drinking, findings did not clearly show that these treatments enhanced abstinence from alcohol consumption. The authors also noted that the weak rating for Serotonergic drugs might be because these drugs are more likely to be prescribed for patients with severe mood disorders. As a result, the patient population for this drug may represent a more difficult population to treat.

Table 2. Grade of Strength of Evidence of Pharmacotherapies for Alcohol Dependence

This systematic review had five limitations that might have influenced the evaluation of pharmacotherapeutic efficacy for the treatment of alcohol dependence. First, there was a lack of consistency in research designs across studies (e.g., differences in outcome measures, varying definition of terminology such as relapse, differing techniques for assessing concepts such as craving), which prohibited the authors from conducting a more rigorous meta-analysis of pooled study results. Since no study examined the efficacy of pharmacotherapies across different drug classes, the relative efficacy of each medication could not be examined. Second, the reviewed studies did not address compliance with medication. Therefore, some reported behaviors of study subjects may have resulted without the influence of the medication under investigation. Third, most study subjects were recruited from substance abuse treatment settings, so the aggregate results likely suffer from a subject selection bias. Findings may not be generalizable to people with alcohol dependence that are not in treatment settings. Fourth, many of the studies had drop out rates higher than 50%. It is not clear whether high drop out rates were related to the effect of the medication under investigation. Fifth, psychosocial interventions implemented for study subjects during the study period were often not described.  Therefore, studies were not capable of determining whether pharmacotherapies were more effective than psychosocial interventions. In some instances, efficacy could be attributable to the effect of other interventions.

Although the results from this systematic review suggest promise for pharmacotherapies such as Naltrexone and Acamprosate as treatments for alcohol dependence, it is important to note that up to 40% of study subjects in the Naltrexone groups and the majority of study subjects in the Acamprosate groups resumed drinking during their treatment. The authors continue to publish studies investigating the efficacy of medications such as Naltrexone for the treatment of alcohol dependence (Garbutt et al., 2005). It seems likely that in order to sustain changed behavior patterns over time a variety of psychosocial intervention options are needed for most patients in addition to pharmacological treatment. However, medication might be a useful tool to help with urges and permit people to manage difficult emotional states while they learn how to escape them and then avoid their alcohol using patterns.  Improved standardization of study measures in future research studies would facilitate researchers’ ability to perform more rigorous meta-analyses and gain a greater understanding of the efficacy of different pharmacotherapies (used alone or in combination with psychosocial interventions) to treat alcohol dependence.

Recognition of a substance use disorders is the first step in the treatment process to changing problematic behavior. In honor of April 6th, National Alcohol Screening Day, free anonymous alcohol screenings will be offered at sites across the country http://www.nationalalcoholscreeningday.org/locator/NASDmap.aspx.

Grant, B. F. (1997). Prevalence and correlates of alcohol use and DSM-IV alcohol dependence in the United States: results of the National Longitudinal Alcohol Epidemiologic Survey. Journal of Studies on Alcohol, 58(5), 464-473.

Posted at 02:42 PM in The Drinking Report for Addiction Medicine (DRAM) | Permalink