From natural disasters like Katrina, to sexual violence, to the death of a loved one, trauma comes in many forms and impacts people in different ways. People who have experienced trauma might place themselves at higher risk for addiction by using alcohol or other drugs to cope with the stress of trauma (Boscarino, Adams et al. 2006). For example, evidence suggests that for sexual assault victims, traumatic life events are a risk factor for drinking problems as well as PTSD (Ullman, Filipas et al. 2006). Similarly, people who cope poorly with minor physical trauma are significantly at risk for developing unhealthy patterns of alcohol consumption (Neuner, Miller et al. 2006). The World Trade Disaster of 2001 negatively impacted the physical health of those who had a strong physical and emotional reaction to the events (Adams, Boscarino et al. 2006). This week, the DRAM reports on a study examining the relationship between psychological trauma and drinking behavior among New York City residents post September 11(Boscarino, Adams et al. 2006).

Interviewers recruited potential participants by random-digit dialing households in New York City. A total of 2,368 New York City residents participated in an initial survey (response rate of 63 percent) and 1,681 participants completed a one year follow-up survey (response rate of 71 percent). The first interviews were conducted between October and December 2002 and the follow-ups were between October 2003 and February 2004. Spanish and English interview formats were available. Participants answered questions about alcohol consumption, binge drinking, and alcohol dependence. In addition to demographic items, the survey included the World Trade Center Disaster (WTCD) exposure scale. This instrument asks participants to rate their exposure to the WTCD events (Boscarino, Figley et al. 2004). Participants also answered questions about negative life events, traumatic events, and past anti-social behavior. Multivariate regression models were used to analyze the relationship between drinking and WTCD exposure. 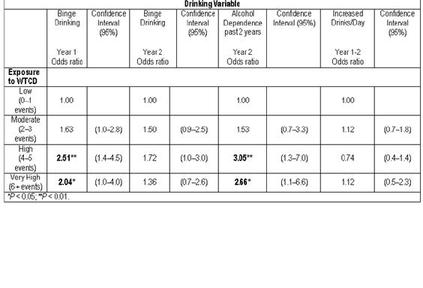 Controlling for anti-social behavior, demographics, and other stressful life events, the study found that WTCD exposure was related to binge drinking during year 1 (October through December 2002). There were also reports of alcohol dependence during the past 2 years at year 2 (October 2003 through February 2004). Participants did not increase their drinking from year 1 to year 2 and the relationship between binge drinking and exposure was not evident by year 2. The results also showed that a history of anti-social history was positively associated with binge drinking during Year 1 (odds ratio = 2.83, p < 0.001) and Year 2 (odds ratio = 2.11, p < 0.01).

One limitation of this research is that the study failed to include people who spoke neither English nor Spanish. Therefore, the results are not necessarily generalizable to different immigrant and ethnic groups. Future studies need to incorporate a wider variety of groups when examining the relationship between drinking behaviors and psychological trauma. The current study measured anti-social history by asking the participants if they were ever homeless and if they were ever in jail. Thus, this measure might not have identified anti-social people who were never in jail or homeless. Researchers will need to include a more comprehensive measure of anti-social behavior in the future. Finally, it is uncertain whether these results are specific to September 11th: other disasters, which receive varying amounts of public and clinical attention, might show a different relationship. Additional studies could examine the interaction between catastrophe and the availability of treatment.

Despite these concerns, this study demonstrates that exposure to traumatic events can be a serious risk factor in dangerous drinking. Thus, it is important to provide the necessary social support and access to treatment for people vulnerable to trauma. Post September 11th, these support systems were made available to those exposed to the tragic event. However, in some cases, like natural disasters, accessing care may be difficult or nearly impossible due to limited resources or restricted access. In such cases, it is paramount to offer such resources as soon as possible. Behavioral health programs can promote better coping methods and prevent post trauma alcohol use as well as other risky coping behaviors.

Posted at 02:47 PM in The Drinking Report for Addiction Medicine (DRAM) | Permalink