« Op-Ed/Editorials: Funding Addiction Prevention Programs: Do Not Throw Out the Baby with the Bathwater | Main | The Dram, Volume 2(5) - Impact of workplace stressors on drinking habits after retirement among men and women »

Researchers recruited study participants through advertisements for gambling treatment research. In order to be eligible, participants had to be at least 18 years old and diagnosed with pathological gambling. Participants who could not speak English and/or had severe psychiatric problems were excluded. Two hundred and thirty-seven pathological gamblers participated. The investigators administered the South Oaks Gambling Screen (SOGS), the antisocial personality module from the Structured Clinical Interview for DSM-IV Personality Disorders, the Addiction Severity Index (ASI), and the Brief Symptom Inventory (BSI) to the participants at intake. The Addiction Severity Index assessed substance abuse problems and the Brief Symptom Inventory measured psychological distress. To qualify for antisocial personality disorder, participants had to endorse six or more criteria: three or more for conduct disorder in adolescence and three or more for antisocial symptoms in adulthood. To compare psychological symptoms of pathological gamblers with and without antisocial personality disorder, the investigators used general linear models controlling for other demographic variables (i.e., age, gender, substance abuse, and education). The models used ASI and BSI scores as dependent variables. 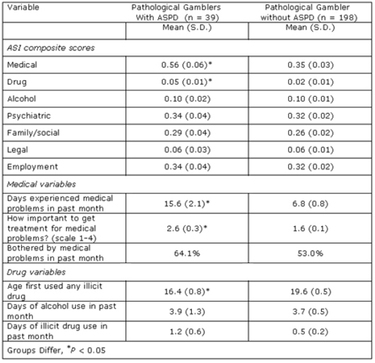 One limitation of the study is that the results may not be generalizable to all pathological gamblers, because the participants were seeking treatment for gambling related problems; most people with gambling problems do not seek treatment. The self reporting also is another limitation, because participants with ASPD might have been more likely to misreport, since “deceitfulness” is characteristic of the disorder.

Posted at 04:39 PM in The Worldwide Addiction Gambling Education Report (The WAGER) | Permalink