The Dram, Volume 2(6) - Off the Sidelines: Women and Drinking Games

Pedersen and LaBrie surveyed 105 (70 women) college students between the ages of 18 and 22. The sample was 59% Caucasian, 15% Asian or Pacific Islander, 15% Hispanic, 2% African American, and 9% classified as “other.” Participants responded individually to a questionnaire assessing demographics (i.e. age, ethnicity, GPA) and past month drinking (i.e., drinking days per week and days per month, average drinks per occasion, and maximum drinks consumed at one time). The questionnaire also included two measures of past-month alcohol-related problems: the eight-item revised College Alcohol Problem Scale (CAPS-r) and the 23-item Rutgers Alcohol Problem Index (RAPI) (Maddock, LaForge, Rossi, & O’Hare, 2001 and White & Labouvie, 1989). After responding to the questionnaire, participants completed a 3-month Timeline Followback for alcohol abuse (TLFB, Sobell & Sobell, 1992); they reported the drinking events and quantity of alcohol consumed, and identified when and what drinking games they played.

In this study, the drinking behavior of women rivaled that of men. The study found no statistically significant difference between men and women for the average number of total drinks consumed in the past three months. Men averaged 87 drinks over the three months (SD = 89) and women averaged 65 drinks (SD = 62). Furthermore, the percent of drinking days that included binge drinking also were not different: men binged on 59% (SD = 34) of the days they drank and women on 54% (SD = 31). Results for drinking game participation showed that men and women both had, on average, 13 drinking events during the past 3 months. The proportion of events that involved drinking games was similar for men (18%) and women (20%). The proportion of women and men who participated in at least one drinking game in the past three months was also similar, for women (64%) and men (57%).

Not only were male and female students similar in their drinking behaviors, they also reported similar levels of drinking-related problems. The mean past month RAPI score was 5.2 for men and 5.6 for women; the mean CAPS score was 12.6 for men and 12.4 for women. However, the study found that women, but not men, who played more drinking games and who drank more during games also reported more alcohol-related problems. Table 1 shows that, for women, drinking game participation and consuming more alcohol during games significantly correlated with higher RAPI composite scores as well as CAPS-Social Problems. For men, drinking game participation did not correlate with alcohol-related problems.

Table 1. Correlations for drinking game variables and alcohol related problems among men and women (adapted from Pedersen and LaBrie, 2006) 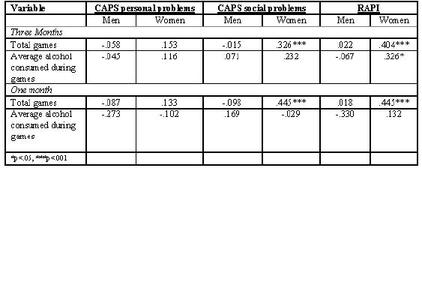 There are several important limitations to this study. First, the relatively small sample size makes it unclear as to whether or not these results can be generalized to all college student populations. Furthermore, because of the limited power associated with utilizing small sample size, type II error is a concern. Finally, this study is limited by its reliance on self-report data, which can be unreliable due to recall bias and/or the tendency to report more socially acceptable behavior.

The findings of this study are important because they contravene the conventional wisdom that women are less likely to engage in risky drinking behavior than men. Women who participated frequently in drinking games were more likely to experience alcohol related problems than both men who participated with the same frequency and other women who played drinking games less frequently. This paper reported on aggregate measures of alcohol-related problems. It is possible that there are gender differences associated with the frequency of different alcohol-related problems and with the relationship between problems and alcohol intake. For example, in the same situation, a woman might report being sexually harassed or assaulted and a man may not perceive any wrongfulness. These differences should be taken into account when comparing rates of alcohol related problems and the frequency of drinking game participation between men and women.

College administrators might want to consider implementing both drinking game education as well as policies to prevent women from suffering from alcohol-related problems. Future research should focus on the social settings within which these drinking games are taking place as well as risk factors that can influence the rates of alcoholrelated problems among women.

What do you think? Comments can be addressed to Juan Molina.

Posted at 03:12 PM in The Drinking Report for Addiction Medicine (DRAM) | Permalink