« The WAGER Vol. 11(7) - Nalmefene: Examining a New Treatment for Pathological Gambling | Main | ASHES Vol. 2 (7) - The influence of peers and families on adolescents’ decision to smoke »

The Dram, Volume 2(7) - Early Onset Drinking and the Development of Alcohol Dependence: A Fresh Look

Starting to drink during adolescence is associated with alcohol-related problems throughout adulthood (Grant and Dawson, 1997). According to analyses of National Longitudinal Alcohol Epidemiologic Study (NLAES), a study conducted by the NIAAA from 1991-1992, 45% of individuals who began drinking before age 14 met DSM-IV criteria for alcohol dependence, compared with 10% of individuals who waited until age 21 to begin drinking (Grant and Dawson, 1997). But, what is the nature of the relationship between youthful drinking of beverage alcohol and the development of dependence on alcohol? This week’s DRAM reviews a study using a recent dataset to re-examine the association between age at drinking onset and onset of alcohol dependence.

Hingson, Heeren, and Winter (2006) used data from NIAAA’s National Epidemiological Survey on Alcohol and Related Conditions (NESARC) to examine whether individuals who began drinking at earlier ages experienced: (1) higher rates of alcohol dependence or (2) experienced alcohol dependence at earlier ages. The NESARC is a national survey of 43, 093 adults in the US aged 18 years or older conducted from 2001-2002. Researchers used multistage probability sampling to obtain a representative sample of US adults. The survey response rate was 81%. NESARC includes measures of lifetime and past-year alcohol dependence, and age of onset of drinking. Study participants met criteria for alcohol dependence if they reported any 3 of 7 DSM-IV criteria. Participants also reported at what age they started drinking alcohol, tastes and sips not included. Researchers used bivariate analyses to test the significance of relationships between age of drinking onset and alcohol dependence measures; they also employed logistic regression analyses to describe the relationship between alcohol dependence and drinking onset. 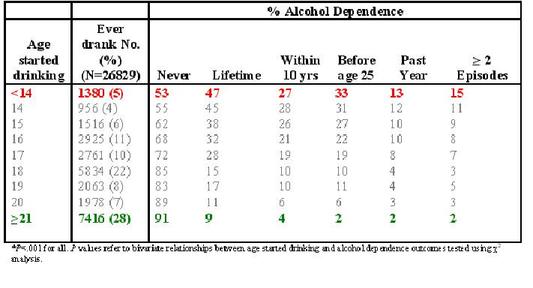 There are a number of limitations to this study. First, recall bias might have altered the results because respondents were asked to recall events that had happened many years earlier. Second, respondents might have under- or overreported their use or age at onset of drinking to conform to perceived social desirability. Finally, some of the DSM-IV criteria might not apply in the same way to individuals across a wide age range. For example, increased tolerance during adolescence might be a normal developmental phenomenon, whereas in adults it is a sign of dependence. Adolescents who begin drinking have low tolerance and through increased drinking exposure they acquire more tolerance. This phenomenon does not necessarily translate into a clinical problem, though it can be identified wrongfully as one. If this researcher bias did occur, then the wrongful classification of individuals as dependent may have skewed the results by mistakenly increasing the amount of dependence episodes in individuals who started drinking before reaching 21 years old.

Despite these caveats, the findings of this study show that there is a need for intervention programs targeting preadolescents. Current programs and policies are not enough to deter adolescents from beginning to drink alcohol at early ages. More effective programs targeting younger children might have a two-fold effect by (1) delaying alcohol consumption as long as possible and (2) limiting the number of individuals who will become alcohol dependent during their lifetime. Furthermore, considering the vulnerable developmental states of adolescents many other psychosocial problems might be avoided by limiting the number and extent of substances adolescents ingest during these formative stages of brain development.

What do you think? Comments can be addressed to Juan Molina.

Grant, B. F., & Dawson, D. A. (1997). Age At Onset Of Alcohol Use And Its Association With DSM-IV Alcohol Abuse and Dependence: Results from the National Longitudinal Alcohol Epidemiologic Survey. Journal of Substance Abuse,9, 103-110.

Posted at 03:00 PM in The Drinking Report for Addiction Medicine (DRAM) | Permalink

Can you haelp me to understand why the percentages do not add up to 100%?

Thank you for commenting on the BASIS and for your interest in The DRAM 2(7) – Early Onset Drinking and the Development of Alcohol Dependence: A Fresh Look.

Again, thank you for your interest in the BASIS and for your comments. We always appreciate reader feedback, questions, and comments.