There are a number of different approaches to the treatment of pathological gambling. Some examples include educational interventions (WAGER 11(4)), talk therapy, 12-step programs, support groups, cognitive and behavioral therapies, and medications (WAGER articles 9(15), 8(21)). This week’s WAGER introduces a new addition to the available treatment approaches and discusses the findings from a recent multicenter, randomized controlled trial of the medication nalmefene for the treatment of pathological gambling (Grant et al., 2006).

Figure 1: Change in mean Y-BOCS scores during a placebo-controlled trial of nalmefene for the treatment of pathological gambling (adapted from grant et al., 2006) 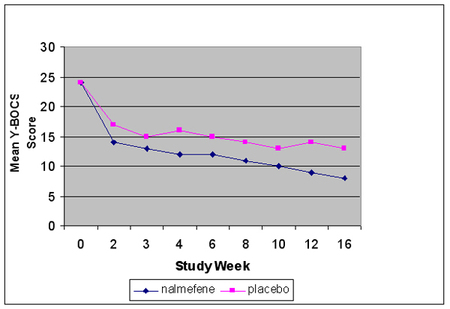 As Figure 1 shows, the mean Y-BOCS scores for both the nalmefene and placebo groups decrease during the study period. However, nearly two thirds of subjects discontinued medication before the end of the study period. The nalmefene group’s mean Y-BOCS score was significantly less than the placebo group’s mean score (p = 0.006) with an estimated difference of -4.64 points (95% confidence interval -7.75 to -1.53) by week 16. These results suggest that nalmefene treatment reduces the symptoms associated with pathological gambling during the 16-week study period. It seems from the dropout rate that nalmefene might work even in low doses or with poor compliance. It is also possible the adverse effects of the nalmefene motivate people to reduce gambling or respond positively on the Y-BOCS.

This study has several limitations. First, this study only investigates nalmefene treatment for a 16-week period. Because pathological gambling is a chronic disorder that might require long-term treatment, there is a need for further investigation of longer-term effects. Second, because researchers recruited medication treatment seekers it is possible that the results suffer from subject selection bias. In addition, exclusion of subjects with psychiatric disorders or receiving psychotherapy limits the generalizability of findings to the larger population of people with pathological gambling. Third, the high rate of subjects who discontinued medication (i.e., 66%) might compromise the conclusions drawn from this study. This rate is consistent with published rates of treatment continuation for pathological gambling; however, the most common reason for subjects’ discontinuation in this study was adverse medication side effects (e.g., nausea, dizziness, insomnia). Elevated rates of side effects among subjects receiving nalmefene in comparison to placebo also might have compromised researchers’ blinding of subjects’ treatment group. Fourth, there was no investigation of confounders such as social circumstances that might have led to symptom improvement among subjects over the study period.

Despite these limitations, nalmefene shows promise as a treatment for pathological gambling. Nalmefene in tablet form is an investigational drug in many countries (e.g., United States) and not yet approved for general clinical use. There is a need for further research to evaluate lower doses and slower titration on treatment initiation to try to minimize side effects. Given the importance of behavioral and psychosocial therapies in managing pathological gambling, there is a need for further studies that include these therapies and medications.

What do you think? Comments on this article can be addressed to Allyson Peller.

Posted at 04:48 PM in The Worldwide Addiction Gambling Education Report (The WAGER) | Permalink