Current research shows that starting to drink during adolescence is linked to a number of alcohol-related problems that can emerge during adulthood (Grant and Dawson, 1997). In the last issue of the DRAM (2(7)), we reviewed an article that examined the association between age of drinking onset and the age of onset for alcohol dependence. Compared to individuals who waited to drink until age 21, participants that began drinking alcohol before age 14 were significantly more likely to develop lifetime and past-year alcohol dependence, dependence within 10 years of starting to drink, and dependence before age 25. This week’s DRAM builds upon these findings by reviewing a study that examined whether individuals who become alcohol dependent at early ages are less likely to seek alcohol-related help or treatment compared with individuals who became dependent later in life.

Hingson, Heeren, and Winter (2006) used data from the National Epidemiological Survey on Alcohol and Related Conditions (NESARC), a cross sectional survey of 43,093 adults (18 or older; response rate 81%) conducted during 2001-2002. Researchers used multistage probability sampling to obtain a representative sample of US adults. NESARC includes measures of lifetime and past-year alcohol dependence, age of onset of drinking, lifetime and pastyear use of 10 different types of drugs, and history of treatment. Study participants met criteria for alcohol dependence if they reported any 3 of 7 DSM-IV criteria. Participants reported age of onset for their first dependence episode, total number of lifetime episodes, and duration of these episodes. Participants also reported if they had ever sought treatment, age at which they first sought help, whether they ever thought they should seek help, and reasons for not getting help. The researchers used odds ratios (OR) and 95% confidence intervals (CI) to compare individuals with early onset of dependence to individuals first dependent at age 30 or older on the likelihood of seeking treatment.

Figure 1. Percentage of Group That Sought Treatment by Age of Onset for Alcohol Dependence 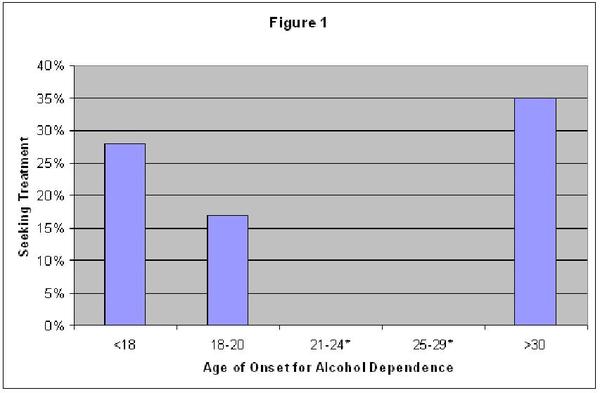 Figure 2. Percentage of Group That Waited ³ 10 Years to Seek Help by Age Onset for Alcohol Dependence 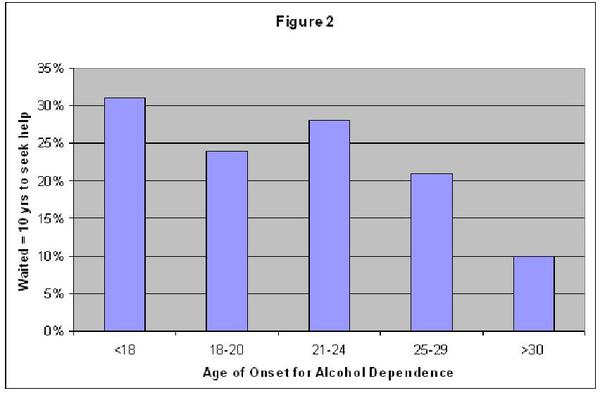 As shown in figures 1 and 2, individuals dependent at younger ages were both less likely to seek treatment as well as to wait longer after dependence onset to seek treatment, however there is no clear linear trend. A comparison between the group of individuals who became alcohol dependent before age 18 and those dependent after 30 presents the strongest evidence for a linear trend, but this is weakened by three very important study limitations. Recall bias might have affected the results since respondents were asked to recall events that had happened many years earlier. Second, respondents might have underreported their use and misuse to create a more socially desirable impression of themselves. Third, as explained in DRAM(2(7)), there is some debate whether the meaning of DSM-IV criteria for dependence should differ for adolescents and adults; this circumstance might have resulted in people being wrongly categorized as dependent at earlier ages.

Also, this study might not have measured all the confounding variables that are associated with both age of onset for alcohol dependence or treatment seeking behavior. For example, genetic predisposition to addiction might have an effect on age of onset as well as subsequent treatment seeking. Further, other life experiences (e.g., physical or psychological abuse as children, parental psychopathology, or parental separation when they were children) could have contributed to individuals developing early onset dependence and affected subsequent treatment seeking.

Despite these limitations the findings of this study are important and helpful. In light of the role alcohol causally plays in stimulating or sustaining the many negative consequences of drinking throughout society (e.g., DUI, psychiatric morbidity, and mortality), it is important to shed light on the treatment seeking patterns of this population and develop public policies that will increase these rates for those with alcohol related problems. In particular, intervention and prevention efforts should focus on reaching early adolescents who might be developing early onset dependence; further, education programs should be adapted to (1) teach children about the risk factors and symptoms of alcohol dependence, and (2) introduce them to treatment options to facilitate these individuals entering treatment at earlier ages.

What do you think? Click Here and let us know! Comments can be addressed to Juan Molina.

Grant, B. F., & Dawson, D. A. (1997). Age At Onset Of Alcohol Use And Its Association With DSM-IV Alcohol Abuse and Dependence: Results from the National Longitudinal Alcohol Epidemiologic Survey. Journal of Substance Abuse, 9, 103-110.

Posted at 03:16 PM in The Drinking Report for Addiction Medicine (DRAM) | Permalink