The WAGER Vol. 11(8) - Eyes on the Prize: Do lottery incentives promote gambling?

The possibility of co-occurring gambling-related disorders among substance abusing patients can influence treatment plans for recovery from substance abuse and vice versa. The use of contingency management (CM)1, an approach found to decrease the use of stimulants among users, is an effective treatment strategy. Some have argued, however, that the use of CM includes engaging patients in a prize lottery which could potentially increase gambling rates among individuals in substance abuse treatment programs (Gerstein et al., 1999; Petry, 2005; Welte et al., 2001; all as cited in Petry et al., 2006). The concern underlying this debate is a phenomenon called “addiction hopping,” where abuse of one psychoactive substance or behavior is replaced with abuse of another (Blume, 1994; Cepik, Arikan, Boratav, & Isik, 1995; Conner, Stein, Longshore, & Stacy, 1999). In this week’s WAGER, we examine a study conducted by Petry et al. (2006), which describes the changes in gambling behavior after prize-based CM in the treatment of substance abusers.

Petry et al. (2006) followed participants to track the gambling rates among stimulant abusers (N=803) in outpatient programs of eight non-methadone clinics (N=415) and six methadone clinics (N=388) and compared gambling rates of patients assigned randomly to 12 weeks of standard care (SC) with prize-based contingency management to the rates of patients receiving SC without CM. The study inclusion criteria required participants to report current stimulant use and/or provide a urine sample that was positive for stimulants. All participants provided informed consent before taking part in the study. Participants were to be excluded if they were recovering from a gambling problem, however, the investigators did not exclude any participants for this reason. To obtain baseline gambling rates, investigators administered an evaluation in which demographic and substance use questions were asked, as well as two gambling questions: “How many days have you gambled in the past month (include days you even bought lottery tickets)?” and “How much money have you spent in total on gambling in the past month?” (p. 270). Participants completed this evaluation at intake, at the first and third months of treatment, and three months after treatment (month six). In the prize-based CM condition, individuals who produced a urine sample negative for stimulants and alcohol were eligible to draw chips from a container entitling them to rewards ranging from a compliment but no prize to a television or stereo.

Petry et al. reported “no significant differences at baseline were noted between those assigned to prize and standard conditions (data not shown)” (p. 270). The study grouped participants who reported gambling at any interview (including baseline) as gamblers and compared the baseline demographics and substance use and abuse characteristics of gamblers to non-gamblers within methadone and non-methadone sites. Among non-methadone patients, gamblers were older, more likely to be males and have a diagnosis of current alcohol abuse or dependence. Among methadone patients, being African American was associated with gambling. The authors tested the differences between the SC and CM treatment groups by examining the proportion of the total sample who reported gambling across interviews. This analyses showed no significant difference between treatment groups over time at either type of sites. The investigators concluded that, “These data provide support for the safety of prize-based CM" (p. 272).

However, a re-analysis of the study results indicates that concluding that CM has no influence on gambling might be premature. We tested the difference in the proportion of gamblers (i.e., the global classification of gambling status using reported gambling at all time points) between SC and CM groups (see Table 1). For non-methadone patients, the difference in the direction of increased gambling among CM patients was statistically significant (X2 = 2.90, d.f. (1), p < .05). The difference for methadone patients was not significant.

Table 1. Distribution of gamblers at any time during the study period and non-gamblers by study groups (adapted from Petry et al. table 1).

* Petry et al. reported column percentages showing, for example, the proportion of non-gambling methadone patients in each treatment group. That particular data was incorrectly reported (i.e., the proportions did not add to 100%) in Petry et al. However, by assuming that all other entries were correct and knowing the marginal totals, we were able to correct the entries using simple arithmetic.

We should note that patients who dropped out before the first follow-up interview were defined by the gambling they reported at baseline. Assigning gambling status using pre-experimental data for dropouts signals another concern. The test of differences in proportion between treatment groups over time were based on proportions calculated for all possible subjects recruited at baseline (N=803); however, the reported retention rates indicated a marked drop-out rate particularly among non-methadone patients. The authors reported follow-up retention rates for Month 1, Month 3 and Month 6 among non-methadone clinic participants to be 78.1, 70.0, and 58.8% and among methadone clinic participants to be 91.1, 83.5, and 77.3%. Using the total sample as the denominator is the equivalent of assigning subjects with missing information to the category of non-gamblers. This biases the results in the direction of finding no increase in gambling. Clinical studies of outcomes and safety use the more cautious strategy of assuming “the worst” outcome for participants who drop out, in this case assigning them to the gambling category. This strategy biases the results against the hypothesis and is a more conservative approach. In doing so, researchers can assure that the observed differences are the least possible differences thus overcoming concern for the effect of drop-outs and missing information on the analyses.

Petry et al. did not report the actual data points used in their analysis but showed the proportion of gamblers by time as a Figure. To illustrate the impact of different ways of dealing with missing observations, we interpolated the figure from Petry et al. and generated another set of outcomes using a moderate correction for the missing observations. The moderate strategy assigned the drop-outs to gambling and non-gambling groups in the same proportion as the actual reports. Figures 1 and 2 illustrate the outcomes for both types of assignment. Consistent with our analysis of the global gambling status, the CM patients in non-methadone clinics have more gamblers than SC patients at all time points. 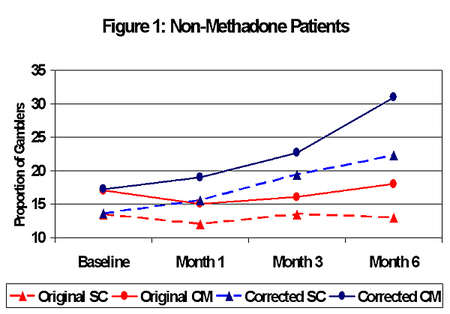 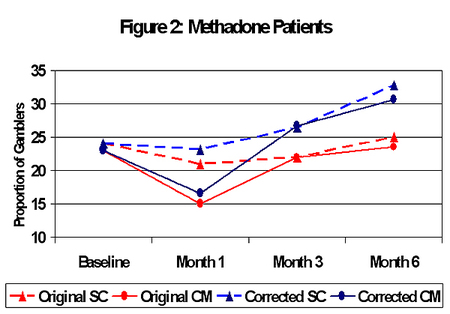 Despite these limitations, Petry et al.’s study addresses an important question. The study reported no “addiction hopping” to gambling among substance users as a consequence of exposure to CM; we might conclude from this article that prize-based CM does not necessarily lead to increased gambling among stimulant users. Alternative analyses indicate a different story. This review provided the BASIS with an opportunity to reinforce in its readers the need for critical consideration of the effect of sample attrition on findings. More research is necessary to reconcile these different findings. Finally, because people that reported a history of problem gambling were not included in the study, we do not know how CM affects people who abuse substances and who might be more at risk for addiction hopping. The concern that people with existing gambling disorders might be stimulated to gamble by exposure to CM remains. Future research will be necessary to investigate this matter.

What do you think? Comments on this article can be addressed to Erinn Walsh.

Posted at 04:54 PM in The Worldwide Addiction Gambling Education Report (The WAGER) | Permalink