Rates of tobacco use are high among teens worldwide (see, ASHES vol. 2(2)). Researchers and public health officials direct most of their efforts to influence teen tobacco use toward the prevention of teen smoking and relatively little effort toward teen smoking cessation (Centers for Disease Control and Prevention, 2006). Although curbing tobacco use demands preventing initiation of smoking, cessation programs also are necessary to reduce the likelihood that teen smokers will smoke into adulthood. This week’s ASHES presents evidence about the effectiveness of teen smoking cessation programs.

Sussman, Sun, and Dent (2006) (1) performed a meta-analysis of 48 smoking cessation studies of girls and boys aged 12 to 19 years. The researchers located those studies by searching Internet databases of scientific literature. They included studies that were published in the English language between 1970 and 2003, focused on cigarette smoking cessation, and used a comparison condition. They defined eligible teen smoking cessation programs as any type of cessation intervention that occurred in any setting. Thus, they included any cessation theory (i.e., motivational enhancement, cognitive-behavior, social influence, medical, other) and any modality of intervention (i.e., classroom, school clinics, medical clinics, family, system wide, computer, sensory deprivation, court diversion). To evaluate the effectiveness of interventions, they calculated the net effect of each study as the difference in the quit rates between the intervention and control conditions and pooled the net effects across studies.

The main finding of the meta-analysis was that the interventions increased the average quit rate by a statistically significant average of 2.90% over the control conditions (see Figure 1). Compared with the control conditions, the intervention conditions resulted in 46% more teens that quit smoking. Further analyses indicated that interventions using motivational enhancement, cognitive-behavioral, or a social influence theory produced positive effects. Interventions applied in a classroom or school clinic setting showed positive effects. Programs had to consist of five or more sessions to be effective. 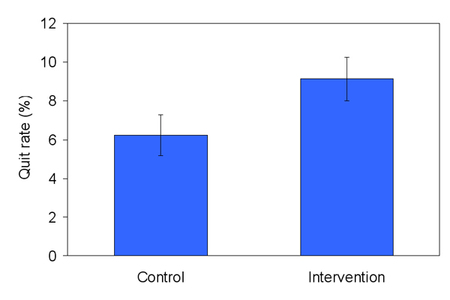 Some limitations should be mentioned. The studies included in the meta-analysis did not use a standard definition for smoking cessation. Some studies defined cessation as not smoking for at least 1 week and other studies required no smoking in the last 30 days. The treatment effects by theory and by modality were tested independently without regard to the interactions between theory and modality. Thus, we do not know whether a specific theory will produce positive effects in different modalities. Further, the studies often did not provide information about intervention characteristics such as the training and experience of the treatment providers, or about the demographic composition of the study samples. Also, the article does not define ‘controlled study’ or ‘comparison group’, and it is not clear whether the control conditions were no-treatment assessment-only groups, or minimal or alternative intervention groups, or some combination of both.

The article presents the first meta-analysis of its kind. It shows that intervention programs targeting smoking cessation in teenage girls and boys appear to be effective. The study is useful for deriving both current guidelines for treatment recommendations and future lines of research. Regarding treatment recommendations, the study suggests that interventions should include motivational enhancement, social influence, and cognitive-behavioral approaches, are probably best be delivered in a school-based setting, and should consist of at least five sessions. The study points to the specific need for further research to employ standard definitions of smoking measures and the general need for additional theory-based, methodically well-conducted trials on teen smoking cessation.

What do you think? Let us know. Comments can be sent to Anja Schumann.