« Addictions and the Humanities, Volume 2(10) - Addiction and Stigma: The Social Perception of Disease | Main | The WAGER Vol. 12(1) - Where the Chips Fall: Another Look at Disordered Gambling and Other Psychiatric Disorders »

STASH Vol. 2(11) - Exploring the Gateway to Illicit Drug Use

The “gateway hypothesis” asserts that the illicit drug use develops from a sequence of events that begins with licit substance use (e.g., tobacco and alcohol), continues to the use of illicit drugs (e.g., marijuana), and finally to the use of less common illicit drugs (e.g., cocaine and heroin). According to this hypothesis, factors specific to each drug determine the progressive transition from one drug to the next; marijuana use is often specified as the gateway to further illicit drug use (Morral, McCaffrey, & Paddock, 2002). Alternatively, some suggest a reverse gateway effect in which social or individual factors (e.g., conduct problems, peer influence) common to all substances explain the reasons for illicit drug use (Lessem et al., 2006). This week’s STASH reviews a study that examines whether the gateway hypothesis has support for certain risk factors relating to the transition from licit to illicit drugs (Tarter, Vanyukov, Kirisci, Reynolds, & Clark, 2006).

Tarter and colleagues recruited 224 males aged 10 to 12 to participate in a study that would assess them at ages 12 to 14, 16, 19, and finally at 22. Study subjects were the offspring of men recruited to participate in another study, which had included subjects with a history of illicit substance use. During each study period, researchers administered the Structural Clinical Interview for DSM-III-R (SCID) to assess criteria for substance use disorders. In addition, participants self-administered the Drug Use Screening Inventory (i.e., a self-report assessment of past month drug use), and took urine drug tests and alcohol breath tests for physiological evidence of recent drug use. In addition, the investigators measured 35 variables that evaluated psychological, family, peer, school, and neighborhood characteristics. Researchers compared responses to the 35 variables by grouping three different sequences of tobacco, alcohol, and marijuana use; they analyzed this data using one-way analyses of variance (ANOVA) between pairs of these three groups. The three different sequences of using tobacco, alcohol, and marijuana were: (1) subjects who used alcohol/tobacco at baseline, but did not use marijuana by age 22; (2) subjects who used alcohol/tobacco and then went on to use marijuana (gateway effect); and (3) subjects who used marijuana and then went on to use alcohol/tobacco (reverse gateway effect). 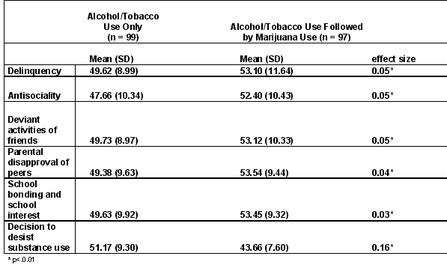 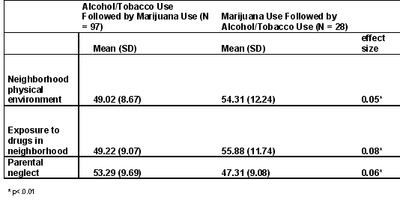 This study has some limitations. Participants’ drug use is based on self-report. Self-report among young people is subject to bias. For example, some will under report their illicit drug use because they fear legal sanctions and others will over estimate their use because they want to dramatize their use. In addition, these findings might not generalize to other segments of the youth population because this study included predominantly Caucasian, male participants. The authors also admit that it is possible that this study might not have measured all factors associated with the transition to illicit drug use or use of specific drugs.

Despite these limitations, this study suggests that illicit drug use does not always occur in the sequence specified in the gateway hypothesis, and that risk factors are not necessarily drug-specific. Rather, these findings suggest that illicit drug use is the result of general social risk factors (e.g., neighborhood characteristics and parental influence). Public policy makers could use these findings to create prevention strategies that target risk factors specific to drug use among youth.

Posted at 03:21 PM in Science Threads on Addiction, Substance Use, and Health (STASH) | Permalink