« ASHES 3(1) - “Just Say NO,” to advertising? | Main | Op-Ed/Editorials - The Challenge of Translating Research to Practice: Are We Getting Lost in Translation? »

Addiction & the Humanities Vol. 3(1) - The Ticket to Addiction: Fyodor Dostoevsky

Fyodor Dostoevsky was one of the great writers of the 19th century. His image on a Russian lottery ticket (NPR, 2005) is ironic considering his life-long gambling addiction. Dostoevsky lived a tumultuous life, undergoing many personal tragedies. He often pawned his wedding rings and wife’s valuables to purchase a ticket home from gambling binges only to be swayed by what he described as a “fever” until he reached the table (Hughes, 2005). He would then write his wife again when he gambled away the proceeds (Amoia, 1993; Freeborn, 2003; Gocsik, 2003; Goodwin, 2003; The Existential Primer, 2007). Despite his success in writing, Fyodor persistently gambled his family into debt and frequently appealed to friends and relatives for money (Amoia, 1993; Freeborn, 2003; Gocsik, 2003; Goodwin, 2003; The Existential Primer, 2007). Although he was desperately ashamed of his actions, he continued to spend his loans at the roulette wheel instead of on bills (Freeborn, 2003). These difficulties probably impacted numerous aspects of his life, from his writing to his addiction. This week’s Addiction & the Humanities will consider the life of Fyodor Mikhailevich Dostoevsky using the syndrome model of addiction (Shaffer et al., 2004). This strategy will illustrate how several factors might have influenced the distinct expression of his addiction: pathological gambling. 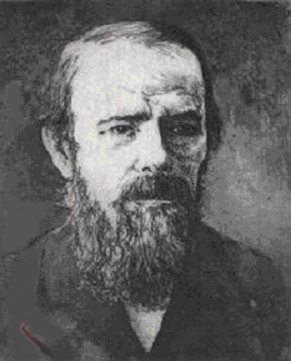 The syndrome model views addiction as “a cluster of symptoms and signs related to an abnormal underlying condition; not all symptoms or signs are present in every expression of the syndrome, and some manifestations of the syndrome have unique signs and symptoms” (Shaffer et al., 2004, p. 367). In addition, “evidence of multiple and interacting biopsychosocial antecedents, manifestations, and consequents—within and among behavioral and substance-related patterns of excess—reflects an underlying addiction syndrome” (Shaffer et al., 2004, p. 367). Dostoevsky’s life events illustrate experiential (e.g. poverty), psychological (e.g. anxiety), and biological (e.g. epilepsy) components of the addiction syndrome model. These vulnerabilities might have contributed to the development and maintenance of gambling addiction.

Many social aspects of Dostoevsky’s life might have increased the likelihood of addiction. Fyodor Mikhailevich Dostoevsky was born in Moscow, the second of seven children, in 1821 to a stern father Mikhail and nurturing mother Maria (Amoia, 1993; Freeborn, 2003; Gocsik, 2003; Goodwin, 2003). Gocsik (2003) suggests that Mikhail’s authoritarian parenting style promoted in his children two things common to many people with addiction: shame and guilt. Gambling, specifically, might have become Fyodor’s object of addiction due to his father’s obsession with status and wealth (Gocsik, 2003). The emphasis on wealth might have caused Fyodor to see a particular advantage to gambling, which is the only addiction that offers the chance to earn money, as well as lose it. Further, pathological gamblers often report that they feel important when they gamble.

Dr. Dostoevsky valued status above all and Fyodor and brother Mikhail despised their father, who treated his serfs with cruelty, insisting his family follow suit. Unfortunately for Dostoevsky, his kind and pious mother died before he was 18, prompting his father to send Fyodor to St. Petersburg to attend the Academy for Engineers; this event separated the two brothers (Freeborn, 2003). Not long after starting private school his father died; many say that his serfs murdered him and left him in the road (Kjetsaa, 1987). After graduating in 1843, Fyodor took a military desk job and returned to the poverty he had known during his early childhood. The financial flip-flop Fyodor experienced might have made him well aware of his financial shortcomings - drawing him to an easy way out of this situation through gambling. By 1843, with his translation of Balzac, he was recognized in literary circles. Soon after this he displayed his own literary talent by publishing Poor Folk, The Double, and The Landlady (Amoia, 1993; Freeborn, 2003; Gocsik, 2003; Goodwin, 2003). Around this time, he began to lose his wages to billiards, dominoes, and later roulette, causing him to borrow money often and gamble it away again (Gocsik, 2003). Consequently, despite his literary success publishing novels like Crime and Punishment (1866), The Idiot (1868), and The Brothers Karamazov (1879-80), Dostoevsky did not attain financial stability (Amoia, 1993; Freeborn, 2003; Gocsik, 2003; Goodwin, 2003; The Existential Primer, 2007).

Dostoevsky became involved in controversial political meetings that led to his eventual arrest and conviction for alleged crimes against the tsar in 1849 (Amoia, 1993; Freeborn, 2003; Gocsik, 2003; Goodwin, 2003). Fyodor was issued the death penalty but instead served in Siberian exile from 1850-1854 (Amoia, 1993). During his exile he was cut off from communication with his brother and alienated by the other prisoners who hated him for his educated social class and literary success (Freeborn, 2003). His troubles persisted upon his release and, to work out of his debt, in 1866 Dostoevsky wrote The Gambler (Amoia, 1993; Freeborn, 2003; Gocsik, 2003; Goodwin, 2003). This book drew upon his personal experience. Though the book was a success, it failed to alleviate his financial stress and added fuel to his gambling addiction (Kjetsaa, 1987).

Fyodor faced numerous psychological challenges in his life. For example, he suffered many deaths in his family during his life. The death of so many family members took a significant psychological toll. In particular, he was profoundly influenced by the death of his father. Sigmund Freud’s study of the Dostoevsky notes that the writer’s extreme guilt was a product of his own desire for his father’s death (Freeborn, 2003, pp. 18-19). The conflict he likely faced upon his father’s death might have increased his tendency to act out by gambling, perhaps making him feel important or perhaps serving as an anodyne to his painful feelings.

Observers thought that Fyodor’s father had an anxiety disorder, his sister was a psychopath, and these problems might have made the author more prone to develop his own psychopathology (Amoia, 1993; Freeborn, 2003; Gocsik, 2003; Goodwin, 2003) – placing him at greater risk for the development of addiction generally, and gambling in particular (Amoia, 1993; Freeborn, 2003; Gocsik, 2003; Goodwin, 2003). In addition, Dostoevsky’s impulsive personality also might have made him particularly vulnerable to adopting faulty belief-systems that often propagate and sustain addictive behavior. “Dostoevsky’s lack of self-control made him a typical ‘system player’. If one could only discover a ‘tendency’ in the roulette wheel—if, for example ten times in a row, the wheel ended its wild dance by landing on red, then all one had to do was to bet on black” (Kjetsaa, 1987, p. 155). His introduction to roulette in Germany and bout of beginners luck caused him to believe he could master the game (Kjetsaa, 1987, p. 155). An impulsive person exposed to a casino environment within which they experience an early win presents a particular threat; it stimulates belief in the illogical. Fyodor lost so much by death, prison, and exile that his own family history of addiction as well as his personality type might have promoted gambling as a coping mechanism to help him manage all of the losses.

Dostoevsky’s family history of addiction, mental illness and epilepsy represents the third cluster of influence on his vulnerability to gambling addiction (Gocsik, 2003). Fyodor inherited—either genetically or psychosocially or both—epilepsy and a predisposition to addiction and mental illness. Dr. Dostoevsky was an epileptic and a heavy drinker, one uncle and two brothers also were alcoholics, and his sister was a psychopath (Hughes, 2005). Alcohol withdrawal stimulated some of Fyodor’s more violent epileptic seizures (Hughes, 2005), although many seizures occurred without such chemical antecedent. Hughes (2005) even suggests a relationship between Dostoevsky’s gambling and his epilepsy. Hughes suggests that epilepsy can be associated with the symptoms of obsessive-compulsive disorder (OCD). Pathological gambling might have seemed an obsessive-compulsive disorder; however, gambling disorders often associate with depression and anxiety. Pathological gambling can occur suddenly without other obsessive-compulsive behaviors or family history of OCD (Hughes, 2005). Dostoevsky’s behavior might be consistent with this explanation.

In 1868, Fyodor lost an infant daughter, Sonya, from a prolonged seizure thought to have been caused by inherited epilepsy. This loss filled Dostoevsky with guilt and shame. His heavy gambling continued. At the roulette table, he lost all of his earnings and delved further and further into debt. Although epilepsy might not have a direct biological connection with addiction, the stress of this disruptive illness might have had a negative impact on Dostoevsky’s daily life. In turn, these events might have exacerbated other problems, thereby increasing the likelihood that gambling provided respite. Such a relief, or desirable shift in subjective state, can increase the likelihood of addiction.

After a long battle with pathological gambling, Dostoevsky quit in 1871; he never discussed how he was able to do so (Hughes, 2005, p. 533). Dostoevsky’s 3-year-old son, Alyosha, died in 1878 (Kjetsaa, 1987(The Existential Primer, 2007). However, Dostoevsky might have developed new ways to cope with this kind of stress. In 1881, the great writer died of a lung hemorrhage likely caused by smoking, which he began in prison.

Although there are many commonalities among the psychosocial and biological antecedents of addiction, the relationship is too complicated and considerable research still remains to demonstrate the variety of causal links. In the case of Fyodor Dostoevsky, the syndrome model of addiction provides some insight into how his unique constellation of biopsychosocial vulnerabilities might have influenced the development of a gambling addiction instead of another type of addictive disorder. Since Freud (1928), many psychologically-minded observers have depicted the psychobiography of Dostoevsky. He was a literary giant and a tragic figure.

What do you think? Comments can be addressed to Erinn Walsh.

Posted at 11:25 AM in Addiction & the Humanities | Permalink