Evidence related to family factors and adolescents’ decisions about using alcohol is mixed. Brody, Ge, Katz, and Arias (2000) found that parental alcohol-related norms and alcohol use was related to children’s drinking. However, Yu (2003) found that parents’ attitudes about alcohol and alcohol use had no impact on their children’s alcohol use; however, this study also found that spending time with parents who drank related positively to adolescent drinking. Thus, to clarify the specific factors that are involved in adolescents’ decisions regarding drinking, it is important to explore further the relationship between parents and teen drinking. For example, parental gender differences might influence adolescent drinking. In this week’s DRAM, we review a longitudinal study that examined several parental factors and their relationship to teen drinking (Seljamo et al., 2006). 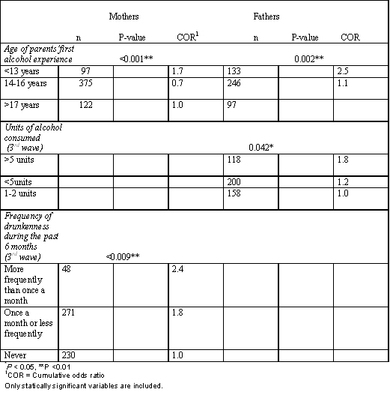 This study has several limitations. First, the study lacked any measure of alcohol dependence. More items assessing alcohol dependence would better indicate whether problem drinking was present. The study also could have included questions about alcohol attitudes and beliefs, since there are contradictory reports about how these impact teen drinking. Another limitation was the self-report data; for example, both parents and children might have under or over reported alcohol use due to the perception of social norms. The findings might not generalize to adolescents from other regions due to the lack of variation among the sample, as well as geographic variations associated with legal drinking age (i.e., the legal drinking age in Finland is 18) (Poikolainen, Tuulio-Henriksson, Aalto-Setälä, Marttunen, & Lönnqvist, 2001). This study also experienced declining participation rates, a common limitation in longitudinal studies. This problem might have biased the data because dropouts could have been different from remaining participants. In addition, teens who reported no drinking could still be using other drugs like marijuana; further research should ask additional questions about other drug use.

This study illustrates the importance of parents’ influence on their children’s drinking behavior. Public health prevention workers need to consider these findings when implementing prevention programs as well as treatment for alcohol misuse. For example, there are differences in how drinking behaviors of mothers versus fathers relate to adolescent drinking. Researchers need to examine the reasons for these gender differences and further explore their implications. In addition, investigators need to examine closely how structural changes in family (e.g., separation and divorce) relate to teen drinking. Future research focusing on this complex relationship might yield important information that can help prevention programs develop strategies to effectively target at-risk adolescents. We encourage health organizations and families to work together in their efforts to combat alcohol misuse.

Posted at 10:48 AM in The Drinking Report for Addiction Medicine (DRAM) | Permalink

Public health prevention workers need to consider these findings when implementing prevention programs as well as treatment for alcohol misuse. For example, there are differences in how drinking behaviors of mothers versus fathers relate to adolescent drinking. thanks for bringing this up to us.