« Op-Ed/Editorials - Making the call: Gambling helplines in the U.S. | Main | STASH Vol. 3(2) - Cocaine Use during Pregnancy: What are the Long-Term Effects on the Child? »

Addiction & the Humanities Vol. 3(2) - If Leonardo smokes, so do I: The effect of smoking in movies on smoking in adolescents

Social cognitive theory (Bandura, 1986) posits that interactions between various risk factors in the environment (including, individual factors, peer factors, parental involvement, and media influences) and in cognitions (including, beliefs, norms, and expectations) lead to favorable or unfavorable attitudes towards a behavior of interest (e.g., smoking), which then lead to an increased likelihood of participating in the behavior. According to this framework, exposure to smoking in movies should influence mediating attitudes towards initiating smoking among adolescent never-smokers (Sargent et al., 2002). There is a wide range of research about this topic, and this week’s issue of Addiction and the Humanities will review and discuss the available evidence. We will present studies that assessed the prevalence of smoking in movies, studies that examined the impact of smoking in movies on smoking by adolescents, and studies that explored potential measures to prevent adolescent exposure to smoking in movies.

Researchers have studied the extant to which movies contain scenes showing people who are smoking. One study found that the “smoking prevalence” among movies decreased during the period from 1950 to 1990, but increased rapidly after that period (Charlesworth & Glantz, 2005). Consistent with this finding, a study by Dalton et al. reported that, of movies shown from 1988 through 1997, 87% contained scenes of tobacco use (Dalton et al., 2002). A later study looking at movies released from 1996 through 2004 reported a marked decrease to 57% (Worth, Dal Cin, & Sargent, 2006). One study used the interesting approach of comparing the smoking prevalence among movie characters with the actual smoking prevalence among adults in the United States (Worth et al., 2006). The overall rates were remarkably similar. However, although the pattern of average movie-prevalence was a good approximation for actual smoking, the large variability across movies did not support the finding that the two rates are linked.

At a more direct level, researchers have found a moderate to strong association between seeing smoking in the movies and having positive attitudes toward smoking (Charlesworth & Glantz, 2005; Sargent et al., 2002). Adolescents whose favorite movie star smokes expressed lower levels of commitment not to smoke (Distefan, Gilpin, Sargent, & Pierce, 1999; Tickle, Sargent, Dalton, Beach, & Heatherton, 2001). Other studies went further and found a relation to actual behavior. In a nation-wide representative survey, the more movies with smoking adolescents had watched, the more likely they were to have tried smoking (Sargent et al., 2005). In a prospective cohort study, adolescents were more likely to have changed from never-smoking at baseline to smoking at follow-up when they were in the highest quartile of exposure to movie smoking (i.e., when they had watched the highest number of smoking occurrences in movies) (Dalton et al., 2003).

Persuaded to the position that a relationship exists, some scientists have argued that movies containing smoking generally should be rated ‘R’ (Charlesworth & Glantz, 2005). Others suggest pressuring the movie industry to reduce smoking in movies (Sargent, 2005). Some observers have encouraged parents to restrict or monitor children’s and adolescents’ movie watching, because this has been shown to have a protective influence on the risks for smoking (Dalton et al., 2006; Sargent et al., 2004).

One major limitation of this research is that the causal attributions about movies and smoking might not be correct. It remains unclear whether viewing movie smoking causes adolescents to start smoking, or whether adolescents who become interested in smoking self-select to watch movies with smoking depictions. Although compelling evidence is available, conclusive evidence to infer causal links would require randomized controlled trials, but this methodology has ethical limitations that make it inappropriate to investigate this topic. Another limitation is that all studies so far have been conducted with adolescents from the United States. Movies, however, are popular across cultures and countries. Therefore, the impact of movies on adolescents outside the United States also needs to be examined. 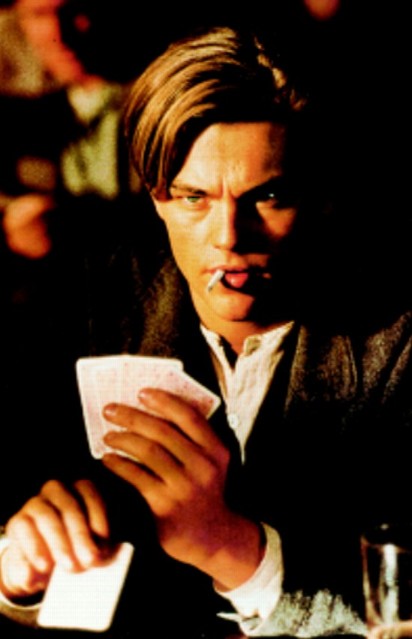 In recent years, the culture of smoking in movies seems to be changing, and smoking movie characters or smoking movie stars are not as socially accepted anymore. For example, the release of the biggest blockbuster movie of all times, Titanic, in 1997 was followed by an outcry among scientists (Chapman & Davis, 1998) and journalists (Gladwell, 1998), because the leading male character Jack Dawson, Leonardo DiCaprio, is depicted smoking throughout the movie (see image above). In defending the movie, the executive producer of Titanic argued that people simply smoked in that time, and that the movie did not try to glamorize smoking (Chapman & Davis, 1998).
Research so far provides empirical evidence that smoking in movies can be a risk factor for some adolescents. However, the full extent of the association between smoking in movies and smoking in adolescents still requires more investigation.

What do you think? Click Here and let us know! Comments can be addressed to Anja Schumann.

Posted at 11:30 AM in Addiction & the Humanities | Permalink