« The DRAM Vol. 3(2) - Addiction-as-Disease: It Is All It’s Constructed to Be | Main | Op-Ed/Editorials - The Real Costs and Benefits: How to Effectively Measure Social and Economic Impacts of Indian Gaming in the United States »

ASHES Vol. 3(2) - Nicotine Dependence—It’s All in the Head

The central nervous system plays a key role in developing and maintaining a variety of pathologies, including addiction (WAGERS 8(34); 8(27); 4(34)). For example, smoking cigarettes activates the brain’s reward-system, which, in turn, stimulates pleasurable feelings (Winger, Woods, Galuska, & Wade-Galuska, 2005); (also see WAGERS 8(30); 8(38); 3 (34)). The effect of brain disease or injury provides a natural opportunity to better understand the functioning of the central nervous system by comparing injured and normal brains. To illustrate, this week’s ASHES reviews Naqvi, Rudrauf, Damasio, & Bechara's (2007) study of individuals with brain lesions, implicating a function of the brain’s insular region in the maintenance of addictive behavior. The present study is important because researchers have not understood the nature of the structure’s role in addictive behavior. Naqvi et al. (2007) connect the insula’s role in bodily representation, cue-induced drug urges, decision making activity prior to drug relapse, and conscious urges. Although the authors use the term smoking addiction, they fail to distinguish between dependence and addiction, therefore it is unclear whether findings apply to nicotine dependence or smoking addiction. We maintain that the current research demonstrates the role the insula might play in maintaining nicotine dependence.

Figure 1. The left insula in the brain shown above along with the right insula, are linked to smoking addiction (Gray, 1918). 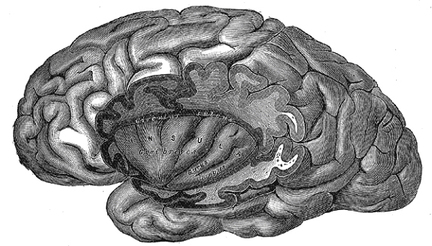 The brain learns after repeated exposure that smoking induces pleasurable effects (Winger, Woods, Galuska, & Wade-Galuska, 2005), therefore, it is possible that the insula maintains the behavior of smoking based on its role in bodily representation. Further Critchley et al. (2004), note that the insula shows enhanced activity during interoceptive tasks which involved judging subjective feeling states. This evidence adds support to Naqvi et al.’s (2007) research examining how the insula might influence processes associated with addictive behavior by studying smokers who also have insular brain lesions. Naqvi et al. (2007) identified cigarette smokers with brain damage (N=69), 19 of whom had damage to the insula and 50 with damage to other areas of the brain. All participants met two qualifications: (1) they smoked ≥ 5 cigarettes a day prior to lesion onset; and (2) they smoked for ≥ 2 years prior to the lesion. The two groups, insula-damaged and non-insula damaged were matched on several characteristics including number of years and number of cigarettes smoked before lesion, and the area of the lesion. We present results from analyses that compared those patients who stopped smoking after incurring brain lesions.

Of the patients with insular damage, 68.42% (N=13) quit smoking following the lesion; only 38.0% (N=19) of patients with damage to other parts of the brain quit. Researchers identified patients experiencing “addiction disruption,” meaning they reported quitting <1 day after lesion, they reported not relapsing, rated themselves as <3 on a 1-7 scale of easy to difficult quitting, and reported no smoking urges since quitting. Results indicated that all five patients with right insular lesions and seven of eight patients with left insular lesions met standards of addiction disruption, but only four of the nineteen patients who quit after non-insula lesions (odds ratio = 136.49, χ 2 = 15.48, and P < .001) met the criteria for addiction disruption. To eliminate the possibility that concurrent brain damage in many patients with insular lesions might confound these findings, researchers conducted a region-by-region logistic regression, to find the likelihood of smoking disruption by region of lesion1. The results of this analysis showed only lesion patterns including the right and/or left insula significantly increased the likelihood of smoking disruption.

Although this study is important to the field of addiction research, it also has several limitations. It is unclear whether participants were dependent or addicted based on the inclusion criteria used by researchers, therefore the role of the insula in smoking addiction is overstated at best. The more conservative claim links the insula with nicotine dependence which does not necessarily mean addiction. It is also unclear if researchers are arguing the role of the insula in the processing of nicotine in the brain or its role in the behavioral patterns resulting from nicotine exposure, making it difficult to assess the findings. Further research is necessary due to the small number of participants with damage to the insular region (N=19). Longitudinal research is required to see if recidivism eliminates these statistically significant differences. Prospective research also is required to study non-quitters with insula damage.
Despite these limitations, the present study suggests a new approach to the treatment of nicotine dependence because it encourages clinicians to develop ways of targeting the insula. The research shows participants with damage to the insula smoked less but the nature of the insula’s role remains unclear. This suggests further treatment options that may help individuals for which other methods failed. In this respect the use of nicotine free cigarettes might be one way of tricking the insula into satisfying its conscious urges by smoking without nicotine. Future research is necessary to investigate the insula’s involvement in the maintenance of addictive behavior by studying its role in other expressions of addiction.

What do you think?  Let us know. Comments can be sent to Erinn Walsh.

1. This analysis included all participants.