Addiction & the Humanities Vol. 3(5) - Celebrity Spokesperson: A perfect match or a "cause célèbre"?

For many years celebrities have worked to bring attention to issues such as, underage alcohol use, drug addiction, and smoking; however, researchers have not systematically examined whether this provides benefits to such causes. Although celebrity sponsorship undoubtedly brings needed attention to addiction-related problems, such attention also could create unwanted complications. Celebrities are, and always will be, under close scrutiny by the public and the media. For this reason, deciding to seek the public support of celebrities for important causes should be done after weighing a number of pros and cons for both the cause and the celebrity.

Celebrities can help important causes in a number of ways. For example, the right celebrity might bring a campaign national exposure overnight. Al Unser Jr., for example, has generated significant amounts of attention for LIVE outside the bottle: The story of alcoholism in America, a national multi-media campaign addressing alcohol dependence in the United States. Since joining the campaign on May 18 more than 100 news articles have been published online discussing Unser Jr., his battle with addiction, and his work with LIVE outside the bottle.

Celebrities can influence public opinion and consequently have the potential to reduce the stigma surrounding addiction. For example, there remains an ongoing social stigma (see BASIS Editorial 2/14/07) associated with addiction because many people still believe that addiction stems from a lack of will power. However, addiction is much more complicated than simply a lack of will power. Celebrities can direct the public toward specific treatment options and educate them about a more accurate understanding of addiction. Two time Indianapolis 500 winner Al Unser Jr. is trying to do this through his connection with LIVE outside the bottle by emphasizing a disease model of addiction.

But, there are also some downsides to celebrity and these could carryover to the causes they seek to support. During recent years, news organizations have focused significant attention on entertainers. News outlets include sources of information found on Internet websites like TMZ or blogs. TV shows that air during primetime like Extra and Inside Edition, as well as gossip magazines People and Star, focus on celebrity news. Unfortunately, this means that many celebrities get caught in the gossip crosshairs, and this potentially can detract from an addiction campaign and create stress for the celebrity. 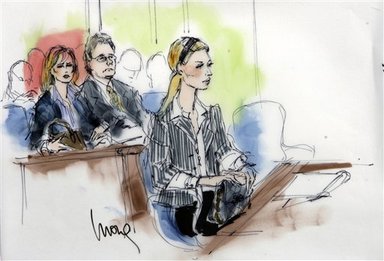 In this court drawing by court artist Mona Shafer Edwards, Paris Hilton, right, is seen with her parents Rick Hilton and Kathy Richards Hilton, left, at the the Los Angeles Municipal Court Metropolitan branch Friday, May 4, 2007, in Los Angeles. Superior Court Judge Michael T. Sauer sentenced Paris Hilton to 45 days in jail Friday for violating her probation. The judge ruled that she was in violation of the terms of her probation in an alcohol-related reckless driving case. (AP Photo/Bill Robles). Paris Hilton came out in support for the Annual SOBER DAY USA: A Day of Awareness sponsored by The Brent Shapiro Foundation for Drug Awareness on May 1, 2006.

Finally, it is not uncommon for celebrities who support addiction-related causes to consider themselves to be “in recovery.” However, relapse is a very common part of the recovery process. In fact, between 60 and 80 percent of those who have experienced addiction to alcohol, heroin, or smoking relapse during the 12 months following treatment (Hunt, Barnett, and Branch, 1971). For celebrities, transgressions are likely to make international headlines soon after it happens. These headlines can be damaging to the campaign and to the celebrity.

The recent struggles of entertainers, such as Paris Hilton and Lindsay Lohan, and the successes of country music star Keith Urban, star athlete Brett Farve, and racing legend Al Unser Jr., have all made the headlines. This is in part due to the speed with which information travels. From smartphones with cameras, to YouTube and blogging, information travels fast. Some might argue that entertainment news is an invasion of privacy, but it might be capable of something much larger. With the help of technology, every new headline, exhibit, website, and celebrity spokesperson builds on the movement to deconstruct the social stigma surrounding addiction. Celebrities will continue to be the focus of media gossip, with paparazzi lurking in every corner. Choose your celebrity carefully; As Forest Gump says “Life is like a box of chocolates. You never know what you are going to get.”

What do you think? Comments can be addressed to John Kleschinsky.

Posted at 03:27 PM in Addiction & the Humanities | Permalink