« Addiction & the Humanities Vol. 4 (9) – Addiction is more than just science | Main | The WAGER Vol. 14 (1) – Scratching the Surface of Comorbidity: Understanding the Relationships between Substance Use Problems, Gambling Problems, and Other Mental Disorders »

The increasing frequency of Attention Deficit Hyperactivity Disorder (ADHD) diagnoses (Center for Disease Control, 2005; Robinson, Sclar, Skaer, & Galin, 1999)) has created an opportunity for an increasing rate of illicit use of the drugs used to treat this disorder. But, compared to other drugs of abuse, the ingestion of ADHD drugs might occur for some atypical reasons. This week’s BASIS reviews DeSantis et al.’s research about undergraduates’ illicit use of ADHD medication. According to researchers, students use the medication illicitly not with the intent of achieving a “high” or “having fun”; instead, they intend to “study longer, stay focused without distractions, and be more productive” at school (DeSantis, Webb, & Noar, 2008).

Figure 1: Reasons for Illegal Use of ADHD Medication (N=585) 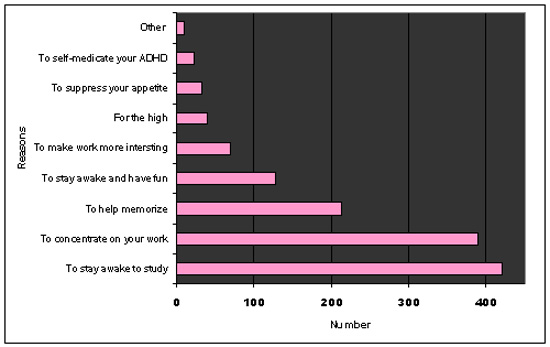 Conclusions
According to DeSantis et al., the use of ADHD medication at this particular university was stigma free and students (39%, N=231) found it “very easy” to obtain pills from people on campus. The ease with which students could obtain drugs and the lack of stigma suggest that conventional methods of dealing with substance use and addiction might not be successful in treating students who abuse ADHD medication. The reasons for use (i.e. to do better, to get good grades, perceived increased intelligence and cognitive aptitude) are difficult to argue against in today’s society and seem distinct from stereotypical reasons for drug use (i.e, to escape, to have fun, to get high, peer pressure). To prevent the illicit use of prescription ADHD medication, dosages should be closely monitored to limit the extra pills that students have and pass on to friends. School and prevention programs would also benefit from changing their courses to include information about the physiological dangers of abusing prescription medication.

What do you think? Comments can be addressed to Ingrid R Maurice