Absinthe, a bitter green liqueur, has had an interesting history, ranging from being a luxury beverage for the rich, to a popular drink amongst all social classes, to the supposed cause of social degeneration for all consumers. Huisman, Brug and Mackenbach compare the social history of absinthe and tobacco to show the similarities between consequences that result from different threats to the public health. As we explore the history of absinthe in this BASIS, we also will discuss how the use of history can help us to better understand potential responses to public health threats.

About Absinthe
Absinthe’s primary ingredient, oil of wormwood, was initially valued for its medicinal qualities. However, this changed when doctors recognized that ingesting absinth could produce hallucinogenic effects and consequences that resembled an epileptic seizure.

During the early 1800’s, absinthe was available to, and most popular with, the upper classes; its popularity trickled down to the lower classes during the middle 1880’s when cheaper production led to a lower price. The increase in absinthe consumption led to its downfall. Doctors surmised that absinthe caused absinthism (i.e., feelings of uneasiness and anxiety, and hallucinations due to the oil of wormwood effects) and described the adverse effects as unrelated to but worse than those brought on by alcohol. Politicians in France viewed absinthe as the root of the possible future degeneration of the French people. They suggested that  those who drank absinthe excessively could develop physical and mental symptoms that would then pass on to their progeny (Huisman, Brug, & Mackenbach, 2007). 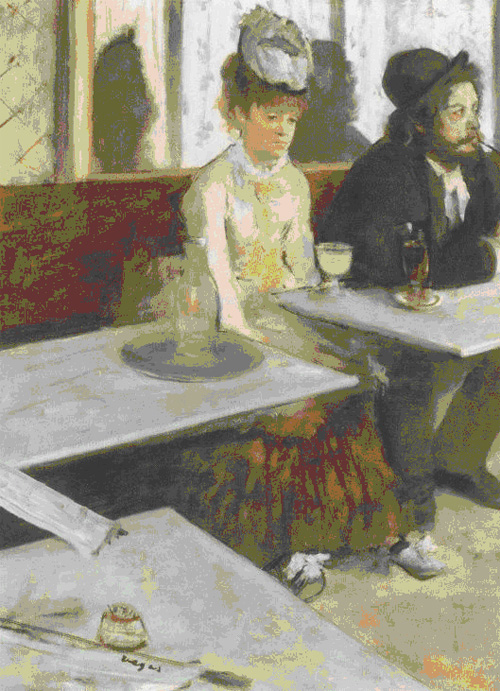 However, warning signs hinting toward absinthe’s toxicity were largely ignored by those who found it profitable (Arnold, 1989; Vogt & Montagne, 1982). In fact, the worldwide bans on the sale and distribution of the liquor were not put in place until the mid 20th century but “consumer reaction at the turn of the century … [did include] mild restraint in drinking the spirit”(Arnold, 1989). The Congo Free State colony was the first to enact a ban in 1898; prohibitions in Belgium, Brazil, Switzerland, The Netherlands, the United States, and France followed during the first decades of the 20th century.

These bans were a public health measure used in an effort to stop the epidemic use of absinthe, and the negative health consequences that resulted. According to Huisman et al “silence … surrounded absinthe for almost a century”, however, absinthe production and sale continued in other countries in which the liqueur was not banned. As a result of this selective banning, absinthe drinkers still had some access to the liqueur. This suggests that the bans were only partially successful in stopping epidemic absinthe consumption. Furthermore, it is difficult to infer just how much absinthe was produced elsewhere, and on the black market, and how this affected the anti-absinthe campaign.

Figure 2: F. Monod’s “Absinthe is death!”(1905).
Skulls were a popular image in anti-absinthe campaigns, with many artists choosing to represent impending death, or absinthe itself as a skull head or a skeleton.

Discussion
A century later, a new and milder form of absinthe, containing less thujone1 is available. As absinthe’s popularity returns, its history provides clues as to how to control risky substance consumption. Huisman et al. suggest that current public health efforts focus on other substances (e.g., tobacco) that pose greater threats to the public health. Although Huisman et al.’s analysis of absinthe’s history is limited by possible inaccuracies among the historical accounts, the authors stress that we can use history to implement improved public health efforts against dangerous substances. The case of absinthe demonstrates the need for action and an understanding of when to act. In the case of absinthe, the bans came just as consumption began to decrease, suggesting a decrease in the liqueur’s popularity. However, each substance has its own characteristics requiring a different course of action. The lesson to be learned from absinthe is knowing when and how to react to possible substance use epidemics.

Notes
1. A neurotoxin and an active ingredient in wormwood that blocks receptors in the Central Nervous System; Modern-day absinthe contain roughly 25 times less thujone than absinthe from the past.

What do you think? Comments can be adressed to Ingrid Maurice.