Absinthe, a bitter green liqueur, has had an interesting history, ranging from being a luxury beverage for the rich, to a popular drink amongst all social classes, to the supposed cause of social degeneration for all consumers. Huisman, Brug and Mackenbach compare the social history of absinthe and tobacco to show the similarities between consequences that result from different threats to the public health. As we explore the history of absinthe in this BASIS, we also will discuss how the use of history can help us to better understand potential responses to public health threats. About Absinthe Absinthe’s primary ingredient,... Read more → 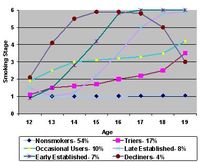 Cigarette smoking patterns typically become established during adolescence (Surgeon General, 1994). This week’s ASHES reports a trajectory study about the smoking behavior of adolescents grouped by early behavior (Bernat, Erickson, Widome, Perry, & Forster, 2008). Methods The researchers used a random digit dialing procedure to recruit 3,637 Minnesota youths between the ages of 12 and 16 at baseline. The researchers interviewed participants every six months for a three year period and used a cohort-sequential design to identify changes in smoking behavior and smoking patterns. Researchers created smoking stages from the participants’ reports of cigarette use. Using semiparametric, group based methods... Read more →

Op Ed/Editorials - Gambling and the Law: The Casino of the Immediate Future

I. Nelson Rose The casino of the future can be found today, in countries like Vietnam and Cambodia. Many countries have allowed casinos, restricted to foreign tourists. The ones I visited in Cambodia were in hotels in Siem Reap, near the famous ruins of Angkor Wat. What is unusual is to see table games like roulette and baccarat. In a majority of jurisdictions in the world today, casinos are limited to slot machines. I didn’t see any human dealers in Hanoi or Ho Chin Min City. But the casinos had the latest in gaming technology. The casino of the immediate... Read more →

The WAGER Vol. 14 (1) – Scratching the Surface of Comorbidity: Understanding the Relationships between Substance Use Problems, Gambling Problems, and Other Mental Disorders

Past research focusing on the co-occurrence of disordered gambling and other mental health disorders has left no doubt that significant overlap exists between disordered gambling and substance use, mood, and anxiety disorders (Crockford & el-Guebaly, 1998; Kessler et al., 2008; Petry, Stinson, & Grant, 2005). However, research has yet to uncover how disordered gambling interacts with substance use disorders and other mental disorders. This week the WAGER reviews a large Canadian study that investigates that interaction (Rush, Bassani, Urbanoski, & Castel, 2008). Methods Canadian nationally representative survey employing face-to-face interviews (n = 36,885) Measures included the Problem Gambling Severity Index... Read more →

Posted at 11:28 AM in The Worldwide Addiction Gambling Education Report (The WAGER) | Permalink | Comments (1) | TrackBack (0)