« Op Ed/Editorials - Gambling and the Law: The Casino of the Immediate Future | Main | ASHES, Vol. 5(1) - Adolescent smoking trajectories: Do all adolescents fit the same pattern? »

Cognitive epidemiology  is a small but growing area of research (Deary, 2005). Early studies in this field show a link between cognitive functioning and health (Deary & Batty, 2006); more recently, the field has connected mental ability to a variety of other behaviors, such as vegetarianism (Gale, Deary, Schoon, & Batty, 2007) and voting preferences (Deary, Batty, & Gale, 2008).  This week’s DRAM explores a study that links the mental ability of ten year old children to their drinking behavior as 40 year old adults (Batty, G.D., Deary, I.J., Schoon, I., Emslie, C., Hunt, K., et al. 2008).

Figure 1.  Proportion of sample who ever had a drinking problem (2 or more endorsements of CAGE questions) and childhood IQ score, by gender. 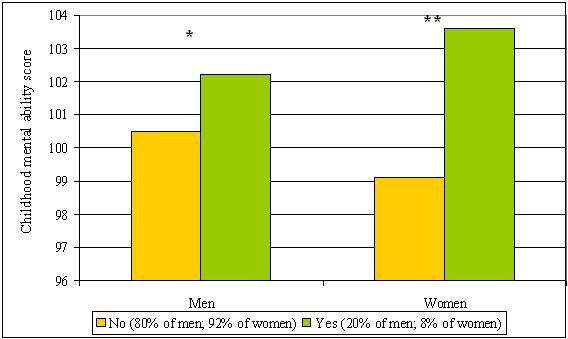 Conclusion
The reason behind the mental ability-drinking relationship is not clear, and there is not yet a theoretical framework to offer an explanation. Those with a high mental ability might be more willing to report drinking patterns, have more expendable income, or are members of social groups that are more accepting of drinking. The relationship might be more complicated: mental ability merely might serve as a proxy for some other unmeasured variables.  A theoretical framework to explain this relationship is necessary to interpret the importance of this association and provide the guide for further research.

What do you think?  Comments can be addressed to Leslie Bosworth.

Posted at 11:17 AM in The Drinking Report for Addiction Medicine (DRAM) | Permalink