« Addiction & the Humanities, Vol. 5(1) - The green monster: Absinthe | Main | The WAGER, Vol. 14(2) - Can Treatment be Short and Sweet? A Comparison of Brief Interventions for Problem and Pathological Gamblers »

Some prescribed medications, such as opioid analgesics, are commonly objects of dependency and abuse (e.g., Martins, Ghandour, & Chilcoat, 2007).  People who abuse controlled pharmaceuticals can obtain extra medication by doctor shopping or by diverting the medication from other sources.  This week’s STASH reports on a study about the demographics, histories of substance abuse, and drug prescription records from people dying of unintentional pharmaceutical overdose in West Virginia in 2006. 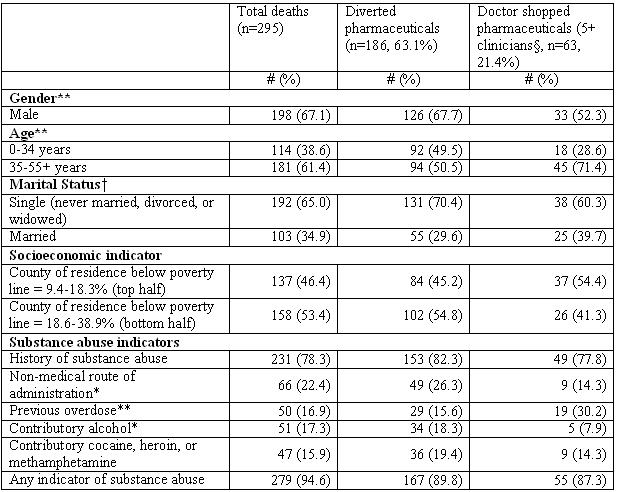 Adapted from Hall et al (2008); statistical significance testing added
§Includes only clinicians who prescribed controlled medications during the past year to the person who overdosed.
†Marital status among people over age 25.
*p=.05; **p<.05 Indicates a statistical difference between people who diverted and people who doctor shopped according to chi-square test.
Please click on image for a clearer picture, or adjust your browser's zoom settings.

Posted at 10:28 AM in Science Threads on Addiction, Substance Use, and Health (STASH) | Permalink