Addiction & the Humanities, Vol. 5(2) - Magic Mushrooms in the Media and in Reality

Turn on the television or watch a movie and it will not take you very long to find a depiction of drug use. This issue of Addictions & the Humanities will consider how the media depicted the effects of hallucinogenic mushrooms in a particular instance and how well that depiction portrays the reality of mushrooms’ effects. We will use “Tree Trippers,” an episode of HBO’s popular television series Entourage, as media reference point.

Mushroom Types & Usage
There are hundreds of types of hallucinogenic mushrooms (Cunningham, 2008); some are safe to consume, while others have toxic effects. People can grow hallucinogenic mushrooms in kits and purchase them on the Internet. People also can find them naturally in manure and forested areas around the world (Cunningham, 2008; Diaz, 2005b). Individuals can consume mushrooms raw, cooked, smoked, or used in a tea-like drink (Cunningham, 2008; Diaz, 2005b). Individuals also have reported spending time setting up their environment before consuming mushrooms because the popular wisdom considers that your last thoughts (i.e., positive or negative) and the social setting (e.g., nature or domestic) as a major influence on the “trip” (Riley & Blackman, 2008). One of many risks to individuals is that many mushrooms appear similar (e.g., the Galerina Mushrooms closely resembles some magic mushroom species, but is deadly) (Cunningham, 2008).

Figure 1 illustrates two common hallucinogenic mushrooms: the Fly Agaric and the Liberty Cap. The Fly Agaric is purportedly the stronger of the two types. 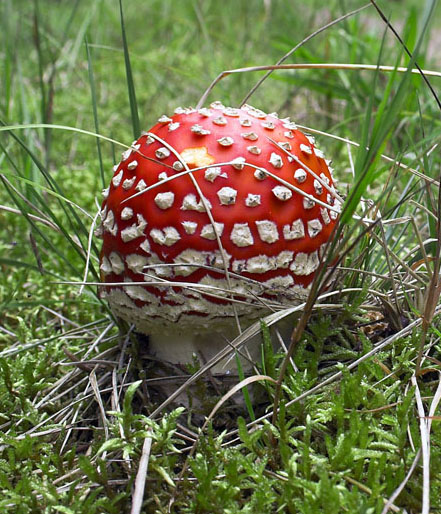 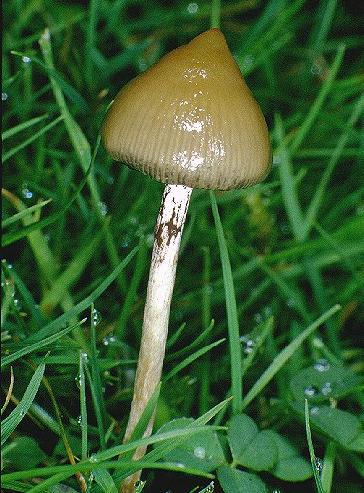 Mushroom “trips” are dichotomous; users tend to categorize “trips” as good or bad. Users recognize that bad experiences can occur and have developed strategies to cope with a bad trip (e.g., the “ride it out” strategy) (Riley & Blackman, 2008). Experiences vary widely from person to person. Typically the onset of the effects of hallucinogenic mushrooms is between 30 minutes and two hours after ingestion. The clinical effects last between 4 and 12 hours depending on the dose and type of mushroom ingested, tolerance levels, body size, and personal characteristics (expectations, experience, mood) (Cunningham, 2008; DrugScope, 2005; Riley & Blackman, 2008).

Mushroom Representation in the Media: Entourage as a Case Study
The “Tree Trippers” episode depicts hallucinogenic mushroom use when cast members decide to take the drug and then go to the Joshua Tree desert to help Vince, the lead role, make a major career decision. The characters experienced a number of the clinical effects that mushrooms stimulate, as described before. For example, characters demonstrated the commonly held belief that by experiencing mushroom induced heightened introspection and mental revelation they would be able to make a major decision. The difference between good and bad “trips” is also apparent in this portrayal. Characters hallucinated or had altered perspectives (e.g., feeling that one’s hands were really big, feeling that they were being chased by a mythical creature, thinking that your mouth will not speak, and believing they had the telepathic ability to talk with a dog). The characters also experienced anxiety, paranoia, and excessive laughter. The episode portrayed the clinical effects of mushrooms as different for each user. The cast members’ trips” started and ended at different times, they discussed how many mushrooms each person should take based on previous experience, and also were unsure of whether their “trip” was over hours later.

It is important to remember that it is not Entourage’s objective to provide drug education. With that being said, it is fair to assess whether they present a fair and unbiased view of hallucinogenic mushroom use. It is difficult to generalize from this particular representation to the media’s general ability to accurately depict mushroom use without knowing the specific type of mushroom the characters were using. However, this episode was successful in accurately representing many common—albeit mostly positive—clinical effects of hallucinogenic mushrooms. However, the episode failed to take full advantage of the opportunity to include several more common negative effects or any severe negative effects during the depiction of mushroom use1.

Discussion
In this instance, the media portrayed certain aspects of mushroom use well, including good and bad “trips.” However, it missed the opportunity to address the darker side of psychoactive mushroom use. Although this BASIS only considers one episode of a television show into account, other recent media depictions (e.g., Shrooms, Harold and Kumar Escape from Guantanamo Bay and a scene from Knocked Up) similarly do not  show adverse reactions to ingesting mushrooms (with some exceptions in Shrooms). Some might argue that this is fair because such effects are not very common. However, by avoiding the possibility of adverse consequences, the media paints a simplistic and one-sided picture.


What do you think? Comments can be addressed to Tasha Chandler.

Popular wisdom for hallucinogenic mushrooms includes planning and setting up an environment before consumption. Popular wisdom cannot be categorized as a clinical effect, but it is clinically useful because it provides supplementary information regarding hallucinogenic mushroom’s psychological effects. In addition to the clinical effects the characters from Entourage experienced (discussed above), popular wisdom surrounding mushrooms is also depicted. Characters set up their environment by traveling to a place where they felt they would be one with nature; this wisdom can be considered to be consistent with clinical accounts of commonly reported altered perspectives. For example, compare the two following statements from a focus group in the (Riley & Blackman, 2008) study with from the Entourage episode, respectively: “It’s a natural drug and it should be done in nature…its all about like becoming one with nature;” and nature “is where we’ll find the answers [because it is where we] lose stresses, not control.”

Additionally, this episode also showed that mushrooms are grown in a variety of ways (e.g. this batch of mushrooms most likely came from manure as one cast member commented on the taste and another responded that it is because of where they are grown) and recognized that there are multiple ways to consume them (e.g. all characters ate them raw except one who had a peanut butter and shroom sandwich, perhaps to alter the taste) (DrugScope, 2005). *This information was included in a footnote because although it cannot be classified as a clinical effect, it does help in supporting why this Entourage episode was categorized as successful in accurately representing common effects of hallucinogenic mushrooms.

Posted at 04:47 PM in Addiction & the Humanities | Permalink

There is very little support for those that wish to expand their awareness of the world by taking hallucinogenic mushrooms, back hundreds of years ago when there was no government control of such experimentation it was easier to dabble in such adventures,
now if you happen to know of someone with such knowledge you may attempt to expand your awareness, all of the so-called natural drugs are opening small portals to the unknown, and when you become serious about venturing within none of these are necessary only the desire to reach out to the cosmic.

Mushroom medically is reported to treat cluster headaches, resulting in extended periods of remission. Lastly, it is known to increase spiritual awareness, attitudes of life, and altruism. Ultimately, microdosing psilocybin results in a more positive life experience when taken at the right dosage.