Researchers have used ecological momentary assessment (EMA) devices to collect data about the real time activities, moods, and environments of research participants. This data allows investigators to gain a better understanding of the events that precede episodes of drug use. Participants respond to random prompts programmed to appear on the EMA screens at specific times and also initiate their own entries. This week, we review a study about the use of EMA devices to monitor the changes in activity and mood immediately preceding craving for, and use of, cocaine and heroin. In this study, researchers were able to monitor changes in mood and setting by requesting that participants enter information into the EMA devices at different pre-set time intervals as well as at other random intervals. Because there were few heroin-only related events, we limit our report to the cocaine findings (Epstein et al., 2009). Figure 2: Percent endorsing triggers before cocaine use event by hours before USE (adapted from Epstein et al., 2009) (not significant at α=0.05 level). 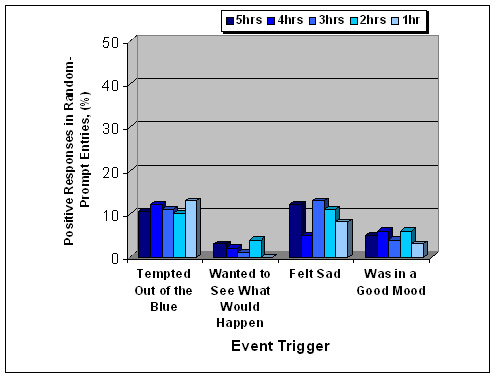 Limitations
o Researchers did not examine the effects of environment, acquaintances, and activities.
o It’s possible that random prompts from EMA devices had damaging effects.
o The participants, methadone patients, are not representative of most drug users.

Conclusions
The use of ecological momentary assessment (EMA) technology presents possibilities for both research and clinical work. Epstein et al.’s study shows that drug abusers can be trusted with electronic devices (only one PDA was lost or damaged for every 226 person-days of use) and will use them as instructed. EMA device use allows researchers to use the recorded data to better understand the acute daily triggers that lead to drug use and craving. These EMA devices have the potential to change our understanding of pre-use and pre-craving events and lead to the development of better relapse prevention and treatment methods that can target specific precursors to individual drug use. Furthermore, it is possible to use these devices in clinical settings, so the treatment methods can be tailored to patients’ day-to-day lives by analyzing the data from EMA device use over a shorter period of time.

What do you think? Comments can be addressed to Ingrid R Maurice

Posted at 12:29 PM in Science Threads on Addiction, Substance Use, and Health (STASH) | Permalink