The DRAM, Vol. 5(3) - College Women Trying to Drink Men under the Table: The Effects of Reflective Norms

Though men consume more alcohol than women, women’s alcohol intake has increased steadily during the past thirty years (Johnston, O'Malley, Bachman, & Schulenberg, 2007; Wechsler et al., 2002). Research has begun to explore unique influences on women’s consumption. This week’s DRAM reviews a study that explores the effects of reflective norms (i.e., individuals’ beliefs about what behaviors the opposite sex prefers them to do) on college women’s drinking behavior (LaBrie, Cail, Hummer, & Lac, 2009). 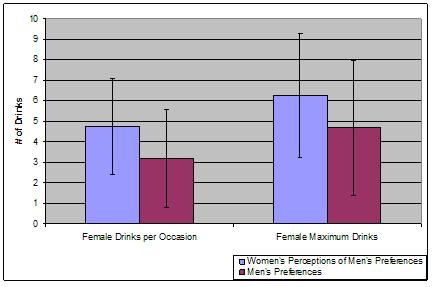 The study suggests that women who drink more do so because they think their male peers prefer women to drink more. This motivation and misperception is particularly troubling because women are more likely than men to suffer sexual aggression while intoxicated (Parks & Fals-Stewart, 2004). College prevention programs should consider informing women about the disconnect between what they think men want and what men do want and address the dangers associated with drinking to impress one’s peers.

What do you think?  Comments can be addressed to Tasha Chandler.

Posted at 03:35 PM in The Drinking Report for Addiction Medicine (DRAM) | Permalink