ASHES, Vol. 5(5) – The Effects of Smoking and Smoking Abstinence on Verbal and Visuospatial Working Memory Capacity

Smoking can cause numerous health problems. However, despite this fact, many people start and continue to smoke cigarettes. Often, smokers argue that smoking actually helps them concentrate and think more clearly. Is it actually so? Working memory is one of the mental systems involved in the thinking process. This week the ASHES reviews a study by Greenstein & Kassel (2009), which examines the effect of smoking on working memory. Working memory is a complex mental system that is involved in performing tasks that require both storage and processing information. How does smoking and smoking abstinence affect working memory capacity? Previous studies examining this question have produced inconsistent results (e.g., showing higher or lower performance for smokers and nonsmokers on different tasks) depending on the task itself. The study under review uses highly reliable, well-validated working memory tasks to examine the effect of smoking and smoking abstinence on verbal and visiospatial working memory capacity. 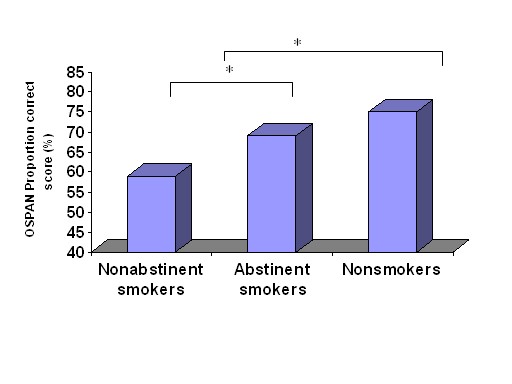 The study claims to test the conventional wisdom that smoking helps concentration. Rather then testing concentration, however, the authors examined the more specific effects of smoking on working memory capacity. The results demonstrate that smoking might cause different effects on different working memory domains. Specifically, (a) smokers’ verbal working memory performance is less effective compared to nonsmokers’, (b) smokers’ verbal working memory capacity is less effective after smoking than during abstinence, and (c) smoking does not affect visiospatial working memory span. These results suggest that smoking actually can impair some of the memory functions necessary for complex tasks (e.g., comprehension, learning, and reasoning). The authors also interpret their results as a demonstration that there is no evidence that smoking helps the ability to concentrate. This particular conclusion, however, seems to contradict the “conventional wisdom” and other scientific results. For example, a recent study (Zabala et al. 2009) showed that smoking facilitated cognitive functioning (including attention and working memory tasks performance) among psychotic patients. The contradiction between these studies might be due to the differences between psychotic and non-psychotic participants. To test this hypothesis and to resolve the contradiction, we need additional studies.