Research has shown that alcohol and tobacco dependence are often comorbid disorders (Grant, 1998; McKee, Falba, O'Malley, Sindelar, & O'Connor, 2007). Research also shows that some of the chemical treatments used for smoking cessation may be used to treat alcohol consumption and craving. This week the DRAM reviews a study that tested the effects of varenicline, a new FDA approved treatment for smoking cessation, on alcohol consumption in heavy smokers and drinkers (McKee et al., 2009). 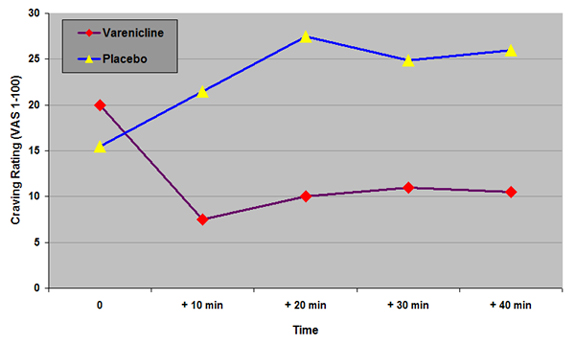 *VAS is a visual analogue scale, i.e., a continuous scale on which participants mark a point indicating their response

This study demonstrated that varenicline was able to inhibit alcohol consumption and craving in people who are heavy drinkers and smokers. Varenicline use had minimal adverse effects. Given that the majority of drinkers smoke, varenicline seems like a promising drug to treat people with dual alcohol and tobacco disorders.

Grant, B. F. (1998). Age at smoking onset and its association with alcohol consumption and DSM-IV alcohol abuse and dependence: Results from the National Longitudinal Alcohol Epidemiologic Survey. Journal of Substance Abuse, 10(1), 59-73.

I think your "Limitation" of not being done in a social setting is a major one as many smokers as well as drinkers are heavily influenced by their peers and the "occassion".