« The WAGER, Vol. 14(5) - What’s in a game? Are certain types of gambling more likely to lead to disordered gambling? | Main | The Addictiveness of Specific Gambling Games » 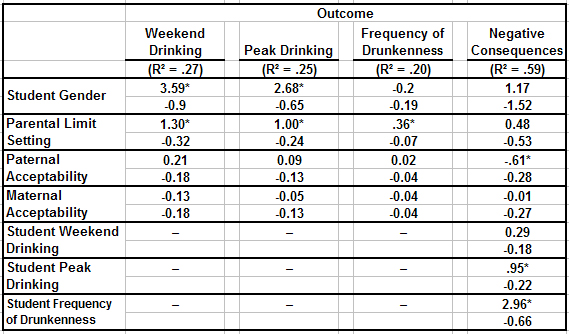 This study does not support the theory that allowing adolescents to experiment with drinking will lead to a later reduction in alcohol misuse. Instead, the study indicates that having parents who allowed any drinking during high school was a significant risk factor for alcohol misuse during college. The size of those limits, if greater than zero, did not affect negative consequences, and paternal acceptance of alcohol use had a negative effect on consequences, suggesting that among students whose parents allowed some drinking in high school, the relationship between parent permissiveness and alcohol misuse is more complicated.

Fewer again? What am I missing. Maybe, I will try to track down the original source.

Thank you for commenting on The DRAM 5(6) – High School Limits and College Drinking: Parental Influence on College Students’ Alcohol Use, which reviewed the study authored by Abar, Abar, and Turrisi (2009).

Your comment about the complexity of the statistical analysis is appropriate. In our reviews, we are limited to the information the authors provide in the original article. This article allowed us to present only the coefficients from multi-variate regression models. However, your comment provoked us to make the table of results more clear by defining the direction of the relations in the table note. For example, for limit setting, there are positive coefficients, indicating that, where significant, more permissive limits relate to more drinking. For paternal acceptability, there is a negative coefficient, indicating that greater acceptability by the father is associated with fewer negative consequences.

You also noted that the results seemed contradictory: increased paternal acceptability of alcohol and not allowing drinking in high school were both associated with fewer negative consequences of college drinking. The results of the Abar et al. study were mixed and that is one reason we chose to review the study in the BASIS. We noted that “the relationship between parent permissiveness and alcohol misuse is …complicated.

Again, thank you for your interest in the BASIS and for your comment. We always appreciate reader feedback, questions, and comments.