Both physiological and behavioral evidence suggest that we might be able to view excessive eating as an expression of addiction. Previous studies suggest that food and alcohol consumption might compete for the same biological pathways (Kleiner et al., 2004). If so, one would expect that engagement in one of these behaviors might lessen engagement in the other. This week’s DRAM reviews a paper that examines the relationship between excessive food and alcohol consumption (Gearhardt & Corbin, 2009).

Figure 1. The effect of weight category and family history of alcohol problems on the frequency of alcohol use 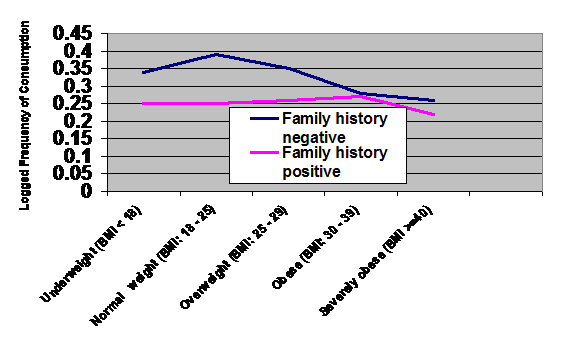 *Click image to enlarge, or adjust your browser's zoom setting.

Grant, B. F. (1997). Prevalence and correlates of drug use and DSM-IV alcohol dependence in the United States:  Results of the National Longitudinal Alcohol Epidemiologic Survey Journal of Studies on Alcohol 58, 464-473.