According to the Centers for Disease Control, during 2005, drug-induced HIV and viral hepatitis combined to kill more than 51,000 people in the United States;  during 2006, there was an increased number of deaths from viral hepatitis ("Deaths: Final Data for 2005"; "Deaths: Final Data for 2006”. Because of unsafe needle practices (e.g., needle sharing, the use of broken or dirty needles) and isolation from conventional medical treatment, intravenous and injection drug use puts individuals at risk for all three of these diseases (Fast, Small, Wood, & Kerr, 2008; W. Small, Wood, Lloyd-Smith, Tyndall, & Kerr, 2008). Furthermore, as all communities are inextricably connected, the threat of disease in the IDU community also places the general population at risk for various infections. Some clinicians and researchers are addressing the healthcare needs of intravenous drug users with Supervised Injection Facilities (or Safe Injection Facilities, SIFs), a new and controversial form of low-threshold treatment; this treatment is open to all individuals and does not require abstinence or use of medication (Kerr & Palepu, 2001). In this editorial, we will examine the innovative SIF approach and discuss the general population’s responsibility to the public health and well-being by engaging in harm reduction.

Before SIFs, intravenous drug users’ main sources of low-threshold treatment were needle-exchange programs. These programs allowed users to exchange dirty needles for new, sterile needles. Unfortunately, as demonstrated by the HIV outbreak around Vancouver’s only needle-exchange facility (Schechter et al., 1999), the presence of a needle exchange program alone might not always be enough to change the culture of IDU and reach all intravenous drug users. Needle-exchange programs usually include some counseling and function with a “no questions asked” system. Many researchers suggest that intravenous drug users also need thorough counseling, education services, and support in the form of medical personnel; these services are combined and centrally located in SIFs (Fast et al., 2008; Schechter et al., 1999; Strathdee et al., 1997).

Intravenous drug users are at risk for physical injuries and IDU is a significant public health threat. SIF supporters maintain that counseling, education, medical support and other SIF characteristics could make these facilities a useful tool against addiction and public health related threats stemming from IDU. Kerr and Palepu (2001), in their discussion of Canada’s potential need for SIFs, describe SIF objectives:

SIFs allow for direct contact with health professionals before, during, and after injections. This might increase users’ knowledge of safe injection practices, decrease the instances of skin and tissue infections and other injuries, and the likelihood of accidental overdose (Bravo et al., 2009; Fast et al., 2008; Salmon et al., 2009; W. Small et al., 2008). As a result, SIFs might reduce the public health threat posed by intravenous drug use. Direct access to medical care provides users with the opportunity to build a relationship with healthcare providers, thus potentially increasing their confidence in the mainstream health care system and providing access to other healthcare services (e.g., primary health care, addiction counseling, and methadone clinic referrals). Intravenous drug users might not find SIFs particularly attractive since they present a completely different setting for drug use (i.e. a sterile environment, the presence of medical personnel). However, as a low-threshold treatment method, also a characteristic of needle exchange programs, SIFs can connect with users at any stage in the process of addiction—from first injection drug use to recognition of an addiction problem—and provide as many or as few services as users are comfortable with to move toward better health, (i.e. fewer injuries and ER visits) an enticing incentive. It is not surprising, then, that evidence-based research suggests that SIFs, a form of immediate short-term intervention, help users face their problems and begin to change (Bayoumi & Zaric, 2008; Bravo et al., 2009; Kerr & Palepu, 2001).

Although there are numerous advantages, many people criticize SIFs. First, critics claim that SIFs encourage and legitimize drug use because employed nurses are present when users inject themselves. Although this criticism is reasonable, many would argue that the benefits of pre-emptive medical treatment outweigh the risks of legitimizing drug use (Fast et al., 2008; Salmon et al., 2009). Second, critics fear that the presence of SIFs in neighborhoods is a cause for concern. The fear that SIFs will change the atmosphere of a neighborhood and make it unsafe is understandable but unwarranted. SIFs, and other IDU services, are often deliberately located in areas with a high concentration of injection drug users (Schechter et al., 1999) and bring with them new law enforcement to maintain control (Graham, 2008). This setting exposes areas that already have a high concentration of underground intravenous drug users and makes services for users more accessible – potentially improving the safety of neighborhoods. The presence of SIFs could help to reduce the negative consequences of intravenous drug use in neighborhoods (i.e. public drug use, safety concerns, etc). There is a known correlation between high rates of drug use, higher crime rates, and lower quality of life (Crowe, 1998); although the presence of SIFs likely would not completely reverse the effect, it could significantly lessen the negative consequences caused by increased neighborhood drug use. Lastly, there are also questions about funding and legal jurisdiction for SIFs. This matter depends on both the government and society’s opinions: who is responsible for the addiction problem? Currently, in Vancouver, funding for Insite, the only SIF in North America, comes from the government and by the public Vancouver Coastal Health authority (D. Small, 2008). Similar funding, a combination of public and private funds, could prove effective in the US as well. With the responsibility of funding divided between multiple entities, people would be aware of about the need for SIFs.

SIFs have undeniable potential to provide new and effective safety and possible treatment methods for those affected by intravenous drug use (i.e. users, communities, etc.) As with all advances, SIFs will need reform, further research, and more testing. However, in a short amount of time, Insite, Canada’s SIF has already started to have an impact and has shown great economic potential, demonstrated by cost-effectiveness and health savings research. Intravenous drug users frequently use emergency and ambulance services for overdoses, infections, and sometimes as a primary source of health care; this use of emergency services represents a large portion of healthcare costs (Beletsky, Davis, Anderson, & Burris, 2008; Salmon et al., 2009). In theory, SIFs should minimize hospital ER and ambulance use and decrease the number of intravenous drug use-related deaths, infections (HIV, AIDS, Hepatitis A), and crimes (Beletsky et al., 2008). The end result would be a potential reduction in millions of wasted dollars and add an increase in years to individual lives. In a 2008 simulation study, researchers considered possible outcomes from SIF use (decreased needle sharing, increased use of safer injection practices, increased referrals to methadone treatment) and their effects, and determined that negative outcomes (e.g.,  infections, overdose, deaths) could be avoided and SIFs could potentially save around $18 million dollars and gain around 1175 life-years (Bayoumi & Zaric, 2008). Figure 1 illustrates the hypothetical ratio of potential cost-effectiveness. As previously stated, SIFs are a pre-emptive mechanism; if injection drug users utilize their services they are less likely to place a financial burden on emergency services. 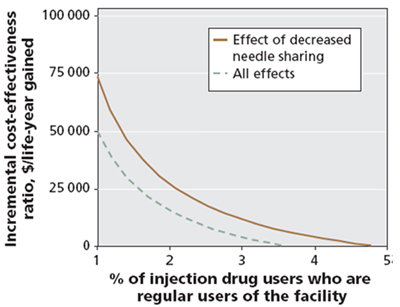 “The solid line indicates the cost-effectiveness when decreases in needle sharing are considered the only effect of the facility. The dashed line indicates the cost-effectiveness when all effects are considered (decreased needle sharing, safer injection practices [e.g., use of bleach to sterilize shared needles] and increased referral to methadone maintenance treatment). The base assumption was 21% (not shown)” (Bayoumi & Zaric, 2008).

As with all new interventions, first and early implementations of SIFs might not work up to its potential. The majority of current research about SIFs has been qualitative; this is a significant limitation. However, the results suggest that SIFs have the potential to decrease the spread of HIV/AIDS and Hepatitis in the IDU population (Kerr & Palepu, 2001; D. Small, 2008). Canada’s SIF has shown promise but none has been implemented here in the United States. Combining the positive characteristics of SIFs (i.e., counseling, emergency services, central location, education) with those of NEPs (i.e., low-threshold, “no question asked”, quick needle exchange) and also supplementing these with active outreach (Zinberg & Shaffer, 1990) could potentially result in a more effective form of low-threshold treatment for intravenous drug users.

Concerns about SIFs ignore the significant potential advantages of these programs, especially if combined with aspects of NEPs that already have proven moderately successful. Reaching a large concentration of injection drug users, introducing them to safer injection practices, and putting them in direct contact with health professionals may reduce the public health impact of injection drug use and bring necessary health services to the intravenous drug user population. the longer intravenous drug use remains unchecked the more likely serious infections will continue to plague both the IDU and majority population. The British Columbia Supreme Court took a step in the right direction when it extended Insite’s exemption from a federal drug law ("Vancouver's supervised injection facility granted constitutional exemption from federal drug law," 2008). However, there are many other individuals, worldwide, who we must help to recover and become fully functioning members of society again.

Posted at 01:00 PM in Op-Ed/Editorials | Permalink