Opioid abuse affects more than 1 million North Americans and is a serious public health concern contributing to ill health and fatal overdose (United Nations Office on Drugs and Crime, 2008).  Although maintenance treatment with oral methadone is standard for opioid dependence, some opioid-dependent individuals do not respond well, have difficulty maintaining treatment, and/or continue to use illicit opioids while receiving methadone. This week’s STASH reviews the first North American randomized controlled trial of diacetylmorphine, the active component in heroin, versus methadone treatment for opioid dependence in individuals for whom standard treatments have been unsuccessful (Oviedo-Joekes et al., 2009). 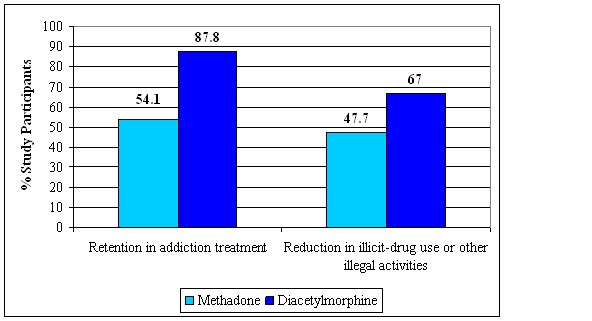 Conclusion
This study shows that individuals treated for opioid dependence with injectable diacetylmorphine were more likely to remain in treatment and were less likely to engage in illicit drug use or other criminal behaviors compared to those treated with oral methadone.  The study authors conclude that for the subgroup of opioid-dependent individuals for which traditional (i.e., methadone) treatment options are not successful, clinically supervised treatment with diacetylmorphine appears to be a safe and effective treatment option. This interpretation must be tempered, however, because the researchers failed to account for the potential confounding effect of route of administration (i.e., oral vs. injected) on the study outcomes. It is likely that injection heroin users would prefer injection to another treatment (i.e., oral methadone) that requires significant behavioral change and places them on a different physiological and therefore psychosocial schedule. Perhaps diacetylmorphine administration is more appropriately understood as a harm-reduction strategy similar to needle exchange programs.  Further research is needed to assess the impact of diacetylmorphine administration on the lives of opioid dependent individuals.

* Twenty-five study participants were assigned to receive a treatment option not addressed in this review.