Op-Ed/Editorials: An Inconvenient Leak: ClimateGate and The Transparency Project

This year, the Division on Addictions launched The Transparency Project, an initiative that provides, to our knowledge, the first-ever open access database repository for privately-funded data related to addiction.

Recent events surrounding research on global warming have reinforced the importance of transparency in research practices. A set of emails involving prominent climatology researchers at the University of East Anglia was leaked to the public a couple of weeks ago. These emails contain statements that suggest data were being manipulated to support pre-existing conclusions. Whether we consider the emails to be taken out of context or unmistakable evidence reflecting unethical research practices, one thing is clear: this team’s research has been called into question, and without access to the data, it is impossible to evaluate the accuracy of that research.

A search of these emails (available in a searchable database at: http://www.eastangliaemails.com) reveals a reluctance to release both raw data and, more crucially for the arguments being made, algorithms used to convert the data to the “hockey stick” type graphs often presented as evidence of anomalous global warming during the late 20th century (see http://www.eastangliaemails.com/emails.php?eid=1037&filename=1254751382.txt).

Let’s assume for argument’s sake that no willful misconduct took place. What can we assume to be the researchers’ motivation for not disclosing their data? First, examination of the emails reveals that several global warming skeptics (e.g., Steve McIntyre) have been constant thorns in this research group’s side for a decade or more. The emails reveal that the research group viewed these critics as pestering them incessantly for data access and nitpicking their results. Most researchers involved in any area of research that crosses into the realm of public policy and politics are familiar with persistent critics and, perhaps, can sympathize with the desire to ignore them and hope they go away quietly. But this strategy does more to harm the science than protect it, no matter how political the arena. Let the data and methods speak for themselves. If the critics are crackpots, their criticisms will fall away when countered with actual data and facts. If they are genuine scientists, science can be advanced by having more eyes and 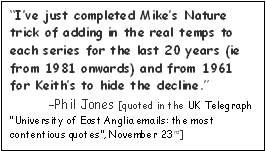 brains engaged with the data. Skepticism and critical investigation are often the engines that drive scientific advance.

Perhaps the motivation for withholding data is the worry about what might be found if other groups examine the evidence. The research group might be embarrassed if a data or algorithm error is found. Perhaps data actually have been lost or the methods are not properly documented. But, under these circumstances, there is even more reason to make transparent data sharing a convention among scientists. If data sharing becomes an expected practice, researchers likely will make even better efforts to archive their data and document their methods than they do now. And if there are errors in the original analyses, is it more important to protect our reputations or advance an accurate evidence base? Both the climate change fields and addiction science research communities share the experience of having research put into practice and policy – it is crucial that research findings be as accurate as possible because it is likely that these findings will be acted upon. All scientists can make errors during the crunching of data – if we share our data transparently, observers can evaluate these errors for what they are and correct them. If we do not disclose our data and methods, errors can either harm science by going undiscovered or harm both science and research teams by spawning the claims of cover-up and bias as evidenced by Climategate.

This recent global warming controversy supports our call for more transparency in science. It also illustrates the inherent risks associated with insufficient public visibility and access to the process of scientific inquiry. This unfortunate circumstance diminishes the role of science in contemporary society and allows pseudoscience to hold as much sway as rigorous science. In contrast, an open and transparent system of science is self-correcting and credible. Transparency ensures scientific advancement. We believe that, as the Internet matures, transparency should and will become the norm. Consequently, we invite you to participate in our Transparency Project by making use of the datasets available on our website (http://www.thetransparencyproject.org) and by contributing your own privately-funded addiction-related datasets to this repository.

(Note: Travis Norsen, Debi LaPlante, and Howard Shaffer contributed to the ideas in this article.)

Posted at 12:30 PM in Op-Ed/Editorials | Permalink