« Addiction & The Humanities, Vol. 5 (10) - Beyond the family secrets in Mackenzie Phillips' High on Arrival | Main | Op-Ed/Editorials: An Inconvenient Leak: ClimateGate and The Transparency Project »

Exposure to, and use of, substances during early adolescence is associated with increased risk of escalating use, abuse, and dependence later in life (Agrawal et al., 2006; Grant & Dawson, 1997; Van Etten, Neumark, & Anthony, 1997).  Researchers have identified factors associated with reductions in opportunities to engage in substance use, such as parenting practices that emphasize adolescent monitoring and non-coercive discipline (Chen, Storr, & Anthony, 2005).  This week’s STASH reviews the findings of a family level intervention program focusing on adolescent contact with illicit drugs (Spoth, Guyll, & Shin, 2009). 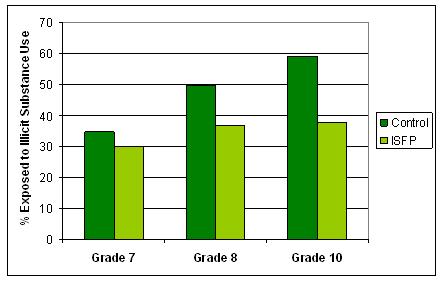 Conclusion
The authors concluded that the results of this study indicate that an intervention targeting young adolescents and their parents provided a protective shield against illicit substance use initiation via reductions in exposure to illicit drugs. They attribute the protective effect to alterations in parental behaviors that limit adolescent exposure to illicit drugs. Further research will be needed to address the limitations of this study, particularly to elucidate the effects of combining ISFP participants and non-participants in the intervention group for analysis and to explore the potential impact of low rates of participation at baseline and varying follow-up rates. Until these limitations are addressed, it is difficult to judge from this study the potential of intervention techniques in early adolescence to reduce harm by effecting behavior long after program participation.
-Erica Marshall

Grant, B. F., & Dawson, D. A. (1997). Age at onset of alcohol use and its association with DSM-IV alcohol abuse and dependence: results from the National Longitudinal Alcohol Epidemiologic Survey. Journal of Substance Abuse, 9, 103-110.

Posted at 12:06 PM in Science Threads on Addiction, Substance Use, and Health (STASH) | Permalink

I agree that the limitations cited by the authors are significant enough to impact the possible conclusions. One of the major variables that I have found in working with young people, and thier families, is that often those who participate in programs such as this often are pre-disposed to positive family behaviors in the first instance.

Thank you for writing up these important new findings from the Iowa Strengthening Families randomized trial. I just wanted to offer a clarification regarding the first study limitation you listed.

The fact that the researchers included all pretested students in the ISFP group in their analysis regardless of whether they participated in the intervention (i.e., an intention-to-treat analysis) is actually an important strength of the study for two reasons:

1) It helped insure that the baseline equivalence of the ISFP and control groups (established through random assignment) was maintained at follow-up. Had the researchers only included ISFP students who received the program, they would have introduced key differences between the groups and thus possible alternative explanations for the study’s findings. For example, ISFP group families who participated in this voluntary program likely were more motivated on average to prevent their children’s substance use than families who chose not to participate in the program. Assuming this was true, if the trial had dropped from its analysis the ISFP group students whose families didn’t participate, leaving only the students from the most motivated families, it would have created a systematic difference between the ISFP and control groups – namely, motivation level. This would have made the study unable to determine whether any observed differences in substance use between the groups was due to ISFP as opposed to the groups’ motivational differences.

2) Conducting the analysis as they did provides the most policy relevant test of the program’s effectiveness under real-world implementation conditions. Realistically, not all people who are offered a voluntary program will participate in it (as borne out in the study). So, comparing the substance use outcomes for all people offered the program vs. an equivalent group of people who were not, provides policymakers with an accurate estimate of the likely population-wide effects of offering it to another population, assuming it is similar to the study population.

This is the perfect webpage for anybody who hopes to find out about this topic. You know a whole lot its almost hard to argue with you (not that I personally would want to…HaHa). You certainly put a brand new spin on a subject which has been written about for decades. Excellent stuff, just great!