STASH, Vol. 6(9) – The briefest of brief: Can a single question serve as a screen to detect drug use disorders?

Drug use and misuse of prescription drugs is an important condition (Cherpitel & Ye, 2008) often unrecognized by primary care physicians (Saitz, Mulvey, Plough, & Samet, 1997) who might be compromised by the limited amount of time they can devote to each patient. Research indicates that brief screening instruments might help physicians identify patients with concomitant conditions as diverse as gambling-related disorders (Gebauer, LaBrie, & Shaffer, 2010) and misuse of prescription medications (Humeniuk, Dennington, & Ali, 2008; Madras et al., 2009). This week the STASH reviews the report of a study testing the utility of a single drug use screening... Read more →

Posted at 05:47 PM in Science Threads on Addiction, Substance Use, and Health (STASH) | Permalink | Comments (0)

Addiction & the Humanities, Vol. 6(9): Selling the Dream: Trends in the Commercial Advertising of Lottery Gambling

In a previous Addiction & the Humanities, we explored the design features of a major alcohol media campaign and the potential connection between these design features and risky alcohol use. The scientific literature focusing on gambling advertising is less well developed; comparatively few studies have examined how governments and advertising agencies use message design and content to promote gambling behavior. This week’s Addiction & the Humanities represents an early step towards a psychology of lottery advertising. McMullan and Miller (2009) analyzed a sample of 920 radio, print, television, and point-of-purchase lottery ads available in Atlantic Canada from January 2005 to... Read more →

Posted at 02:58 PM in Addiction & the Humanities, The Drinking Report for Addiction Medicine (DRAM) | Permalink | Comments (1)

ASHES Vol. 6(9)– Cue the clowns: The effect of external and internal cues on smoking urges 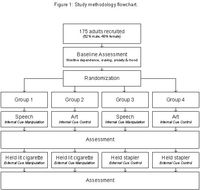 Everyday life produces myriad internal and external cues that can increase craving for cigarette smoking. Previous research has shown that both internal (e.g., anxiety) and external (e.g., smoking imagery) cues can increase smoking urges (Carter & Tiffany, 1999; Kassel, Stroud & Paronis, 2003). This issue of ASHES explores the separate and joint effects of external and internal cues on cigarette craving (Litvin & Brandon, 2010). Methods Researchers recruited 175 adults (48% female) from a low-income neighborhood through newspaper advertisements and flyers. All participants reported that they had smoked at least ten cigarettes daily for more than one year. The researchers... Read more →

Posted at 11:55 AM in The Drinking Report for Addiction Medicine (DRAM) | Permalink | Comments (0)