Addiction & the Humanities, Vol. 6(10) - A punch in the throat: Anti-smoking advertisements as a case study for the ‘sensationalization’ of anti-vice advertisements

Note: Certain images contained below may be disturbing to some. Please use discretion.

The news is abuzz with discussion related to the FDA’s proposed graphic warninglabels for cigarette packs. The new labels are much larger than the previous generation and feature a series of new images. These new images are a source of controversy with some people stating that the images are unnecessarily disturbing, and others doubting the efficacy of the change (Harris, 2010). This FDA effort, however, is by no means the first to employ sensationalistic and potentially disturbing anti-vice warnings and advertisings. Last year, the City of New York ran a campaign called Pouring on the Pounds targeting soda consumption with images of fat being poured out of soda bottles (New York City Department of Health and Mental Hygiene, 2009). In the UK, the city of Gwent released an anti-text-while-driving ad that shows a car full of teenagers involved in a horrific accident, including over 20 seconds focusing on the crash and the chilling aftermath. The ad went viral and has almost one million views on Youtube (link). Today’s Addiction and the Humanities discusses whether such ads are effective and justified. 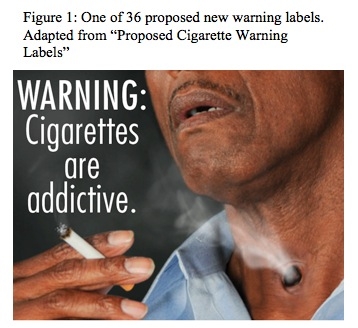 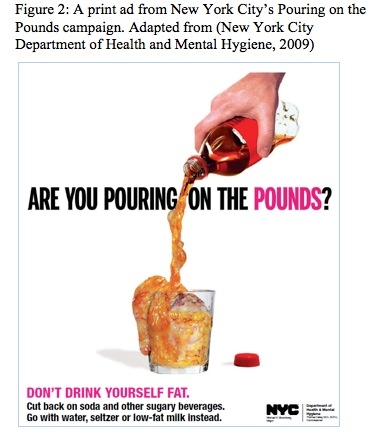 Whereas the United States was the first to mandate cigarette warning labels, the labels themselves have changed little since their introduction (Harris, 2010). Canada and Australia already mandate package warnings with pictures similar to those proposed by the FDA (Borland et al., 2009). Borland and colleagues (2009) showed that Canadian and Australian graphic warnings resounded emotionally with research participants more than text-based American and British warnings. Participants also rated such images as more salient. O’Hegarty et al. (2006) exposed an American sample to American (text-based) and Canadian (image-based) warnings and asked participants to rate the effectiveness of the warnings as a deterrent and motivator of change. Participants consistently rated the Canadian ads as a more effective deterrent. Smokers and former smokers also rated the Canadian ads as more likely to help them quit or stay abstinent. It is possible that these findings were influenced by the novelty of the Canadian warnings, compared to the more familiar American warnings. A similar study by Davis, Nonnemaker, Farrelly and Niederdeppe (in press) explored the effectiveness of anti-smoking print ads based on message content. Participants rated advertisements that provided reasons to quit (e.g. cancer) higher in perceived effectiveness. Of these ads, those providing graphic reasons were rated as more effective than those containing testimonials.

Where does this leave us? Three studies suggest that graphic ads might be more effective at motivating smokers to quit and helping former smokers maintain their abstinence than text-based ads. This is perhaps not surprising considering the dual-process model of persuasion. The elaboration likelihood model of persuasion posits that there are two routes to persuasion: the central route, a logic- and reason-based system engaged when people are motivated to take in information, and the peripheral route, activated when people are unable or unwilling to learn (Petty, Cacioppo, & Goldman, 1981). The peripheral route relies on emotion and unconscious processing, exactly the target of graphic ads. Unless people are motivated to read and process text-based ads and warnings, they are unlikely to be effective. Thus, for the general population, an emotionally laden ad might produce better results (i.e., quitting). There is some support for this: Davis et al. (in press) found a significant correlation between perceived effectiveness of text-based advertisements and intention to quit. These studies did not explore the effect of graphic ads on new smokers. It is therefore unclear whether they are more effective at deterring first-time smokers than textual ads.

Although graphic ads might be more effective, that does not mean they are justified. There are other methods of engaging the peripheral system; anyone who has ever seen a television commercial is well acquainted with the loud sounds and bright colors used to convince us to buy dog food. A previous Addiction & The Humanities (Vol. 6(1)) described the new anti-drug campaign that carries a strong social message against drug use, rather than levying fear. Are we unnecessarily scaring the public? Will these ads retain their effectiveness as people become more familiar with them?

Posted at 12:14 PM in Addiction & the Humanities | Permalink