« Op-Ed/Editorials - Gambling and the Law®: Compulsive Gambler Just Can’t Win | Main | STASH, Vol. 7(2) - When I grow up, I want to be a drug user: Considering childhood self-control and adult substance abuse »

Addiction & the Humanities, Vol. 7(1) – “It’s for your own good!” A look into smoking bans worldwide

New York City made headlines this week when its City Council approved a controversial law banning smoking in all parks, beaches, and many public plazas; including, iconic Times Square (Katz, 2011). Smoking bans are common around the world; however, the scope of the New York City ban is especially broad. Today’s Addiction & the Humanities explores the rise and proliferation of smoking bans worldwide, and briefly discusses some of the science related to their efficacy.

The Proliferation of Smoking Bans

Smoking bans are not a US invention. Cities such as Paris, Berlin, and Vienna had smoke-free streets as early as the 1800s (Levin, 2004). Smoking bans in the US did not begin to emerge until the 1950s, when research detailing the dangers of smoking and second-hand smoke, in particular, became available (Wydner & Graham, 1950). Minnesota became the first US state to enact a comprehensive smoking ban during 1975, barring smoking in many public venues (Levin, 2004; Minnesota Department of Health, 1975). Since then, smoking bans have spread across the United States and around the world in both quantity and severity. Figure 1 below shows the areas around the world that had complete indoor smoking bans prior to 2007. For more specific information about worldwide smoking bans, please check this BBC series on worldwide smoking bans. 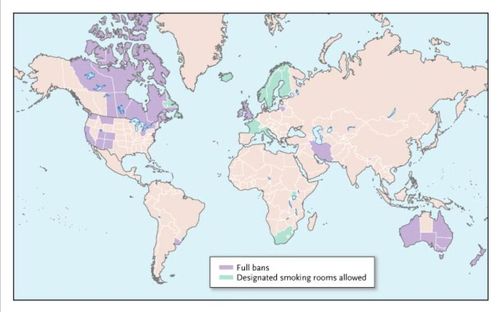 New York City has been active in the attempt to reduce a variety of risks to the public health (see Addiction & the Humanities 6(10) for a brief introduction to NYC’s anti-obesity campaigns). This smoking ban enhances the original New York State smoking ban by banning smoking in almost all outdoor venues (Levin, 2004). New York is not the only US city working towards such comprehensive bans. Cambridge, MA and Raleigh, NC have formed committees to study smoking bans around public parks (Martin, 2011; Parker, 2011). Smoking bans have steadily become more common and stricter in the previous 60 years; this NYC ban is one more step in that direction.

A number of researchers have examined the effectiveness of smoking bans. For instance, Hauri et al. (2010) performed a hypothetical analysis of the public health benefits of a Swiss indoor smoking ban. Their analyses attributed 32,000 preventable days in hospitals to environmental tobacco smoke exposure, costing 330 million Swiss francs, or approximately 350 million US dollars in health care costs. They argued that instituting a smoking ban would yield savings of this financial magnitude. Similarly, Juster et al. (2007) determined that there were 3813 (8%) fewer hospital admissions for acute myocardial infarction after the initial smoking ban in New York State, saving $56 million in direct health care costs. This estimate is lower than predicted by Hauri et al. perhaps because it does not account for other deleterious health effects of smoking, such as cancer and respiratory diseases. Furthermore, research indicates that workplace smoking bans help reduce average consumption of cigarettes by an average of 3.1 cigarettes per person per day, a 29% reduction (Fichtenberg & Glantz, 2002). These three studies are just some of many extolling the virtues of smoking bans. Further research is required, however, whether these benefits are applicable to outdoor smoking bans, such as the new NYC ban.

Are Smoking Bans Worth it?

After the predictions, readers might wonder what we actually know about the impact of smoking bans. Initially, many economists predicted that smoking bans might decrease the business of bars, restaurants, and hotels. However, some studies have shown that there is no tangible decrease in revenue caused by smoking bans (Glantz & Charlesworth, 1999; Hyland, Cummings, & Nauenberg, 1999). In contrast, others have suggested that smoking bans have decreased state revenue from taxes on cigarettes (Levin, 2004); however, this likely is offset by decreased hospital costs and improved public health. People also chide the new NYC law for being an outdoor ban. Outdoor bans are relatively rare, and research on their efficacy is scant. One such study in Australia found that exposure to second-hand smoke at an uncovered outdoor café was quite variable, but elevated over no-smoking environments (Cameron et al., 2010). Whether this level of elevated exposure represents a significant health risk is unclear.

Does the new NYC smoking ban overstep its bounds?

The most egregious complaint about smoking bans, however, is that by introducing smoking bans, the government effectively is curtailing civil liberties. Two considerations to keep in mind: First, outdoor smoking already is prohibited near playgrounds in cities like Toronto and within a radius of many buildings (CBC News, 2009); there is precedent. Second, many societies already have the right to remove nuisances from public spaces, such as loud noises and those drunk in public. Is the new NYC law overly strict? Our position is that smoking bans support public health. The question that remains is whether smoking bans are worth the restricted liberty. Culture certainly will influence how different people answer this question. However, this is an issue everyone and every jurisdiction must decide on their own.

Posted at 02:20 PM in Addiction & the Humanities | Permalink

Bans across the world has saved many people from being affected by second hand smoke. It it healthy for the enviroment as a whole.

I think as far as smoking Ban's are concerned we, as a society, really need to consider, over the long term, how banning smoking hopefully sets a positive example to children. It's ironic whenever I think that social workers along with other health care professionals are obligated, by law, to report that whenever someone is a threat to themselves or another person we must disregard confidentiality and intervene. In my opinion, smoking is a threat, not only to the smoker but to those in close proximity, besides not being good for the envirnoment.

I once heard said, "smoker's have a choice" non-smoker's may not if they in fact have to be exposed to or tolerate someone else's smoking rather that be in a Park, housing/apartment living, waiting for a bus at a busstop etc.

Smoking,besides being addictive, in many respects is a social problems that impacts society at all levels. I think New York City, being tha "Big-Apple" and all which represents health, afetr all an apple a day keeps the doctor away, is doing the right thing.

We all ought to do the right thing and we all know what the right thing is but doing it isn't easy. I remember when a few years ago the Canadian Government traised the price of cigarettes and believe it or not, that alone, motivated parts of society to quit smoking because some stated I am sick and tired of paying the price for cigarettes.

For smoker's it takes time, if or when they decide to quit before they too realize the true danger that smoking causes.