STASH, Vol. 7(2) - When I grow up, I want to be a drug user: Considering childhood self-control and adult substance abuse

Research indicates that several factors might place people at a higher risk for developing problems with substance use. These include exposure to violence, familial substance use, and low socioeconomic status (SES) (Kilpatrick et al., 2000). In this week’s STASH, we review a study that aims to determine if lack of self-control mastery during childhood is a predictor of substance use disorders (SUD) during adulthood (Moffitt et al., in press-a).

Figure 1 – Self-control as a Predictor for Substance Use Dependence (adapted from Moffitt, et al., in press-a) 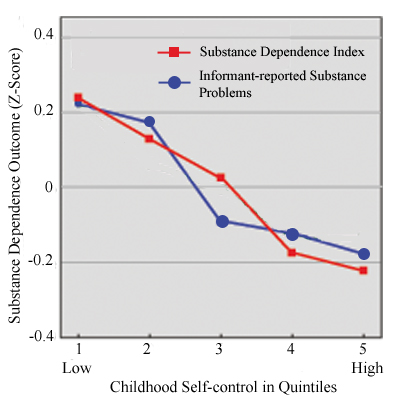 Please note that the outcomes were converted to Z-Scores and childhood self-control is represented in quintiles.

Poor self-control during childhood appears to be related to more substance abuse during adulthood, even after accounting for other known risk factors (i.e., family SES and individual IQ). What accounts for this link? In analyses not reported here, Moffit and colleagues observed that children with low self-control later make poor and impulsive decisions as adolescents (e.g., taking up smoking, becoming an unplanned parent, dropping out of school). They found support for the idea that making poor decisions during adolescence mediates the effects of poor self-control on future substance abuse. Perhaps adult substance use emerged as a way to deal psychologically with the ramifications of poor adolescent decisions. Future research should test whether intervention programs aimed at increasing childhood self-control results in lower risk for substance problems and other adulthood health concerns.

Posted at 12:01 PM in Science Threads on Addiction, Substance Use, and Health (STASH) | Permalink