« The DRAM, Vol. 7(2) - A Binge Influence: Findings from the College Alcohol Study (CAS) highlight the role of college environment in students' drinking habits | Main | Addiction & the Humanities, Vol. 7(2) - Drink Me: Looking into the rabbit hole of anti-energy drinks »

Nicotine vaccines represent a potentially important treatment option for quitting and preventing tobacco smoking. Nicotine vaccines work by inducing the immune system to create antibodies (Ab) that bind to nicotine in the bloodstream and prevent it from reaching the brain. By keeping nicotine from the reward pathways in the brain, nicotine Ab eliminate the pleasurable (i.e., reinforcing) aspect of smoking (Hatsukami, et al., 2011). Today’s BASIS examines the results from the recently completed Stage II trials of NicVAX, the vaccine furthest along in development (Hatsukami, et al., 2011). 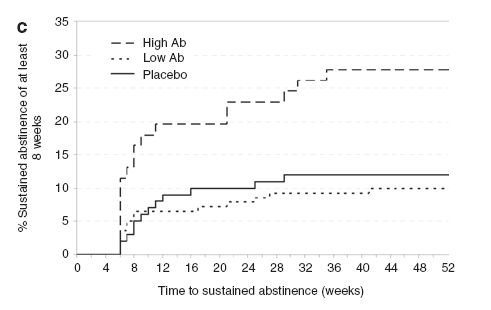 Although not a miracle cure, NicVAX shows promise as a treatment option. Six month abstinence rates for those in the high Ab group are more than twice as high as those reported for nicotine replacement therapy and four times higher than those who attempt to quit ‘cold turkey’. Further research and development is needed to perfect precise dosage regimens, but NicVAX might be a very useful tool in the arsenal of treatment options against nicotine addiction. If stage III trials run smoothly, NicVAX may be FDA approved by the end of 2011 and available as a treatment by 2012 (Drugwatch.com, 2009).