Addiction & the Humanities, Vol. 7(3) - Four thousand years of marijuana use: A brief history

For thousands of years, cultures around the world have used marijuana in various ways for innumerable purposes. This issue of Humanities describes the history of marijuana use from ancient China to contemporary United States (Grinspoon, 1971; Nahas, 1973).

Nearly 4000 years ago, people in China used marijuana as a pain reliever and all-purpose medication. The use of cannabis spread from China to India and the surrounding Asian countries; then, its use spread to Europe. Early in its history, people started using marijuana for its euphoric properties. For instance, around 2000 BC in India, people used cannabis to worship Shiva – the Hindu god of dance and destruction. Similarly, in pre-Christian Germany (around 500 BC) people associated marijuana with the Norse goddess of love, Freya.

During the middle ages, marijuana use was widespread throughout the Arabic world. Because the Muslim religion forbids wine, marijuana became particularly popular as a recreational drug. The Arabic word for marijuana is hashish, meaning, “grass”. Both these words survive in the marijuana lexicon of today. The well-known Tales of the Thousand and One Nights refer to marijuana as a “magic plant,” which gives joy and brightens the spirit. During this time, people in the Arabic world also used marijuana as a folk medicine.

From the Middle East, marijuana use spread to Egypt and the whole of Africa. In Egypt,smoking marijuana became such a prominent habit among peasants that, during the 14th century, Emir Soudouni Schekhouni ordered all marijuana plants destroyed. However, extensive cannabis use, particularly among lower class Egyptians, was apparent to Napoleon during his conquest of Egypt during 1800. Napoleon tried to forbid the use of marijuana, but his interdiction failed, as did others before him who tried to stop the marijuana use.

During the 16th century, Spaniards brought marijuana to South America.  During the beginning of 17th century, King Henry VIII required cultivation of hemp – a marijuana plant - in North American colonies. This product supplied the England maritime industry. Since then and until the Civil War, in America people primarily used the plant for producing winter clothing, bagging, and marine rope. The Civil War almost destroyed the hemp industry because it primarily was cultivated on South plantations using slave labor. Then people learned to use the plant - later called the “Devil’s Weed” - to manufacture the paper that was used to produce Bibles. Interestingly, people in America or Europe did not know about marijuana’s medical or pleasure-inducing properties until the mid-19th century.

Later, during the early 1900s, marijuana became a popular recreational drug among the Mexican working class who brought it across the border to the southern states of America. Members of the “upper class” attributed aggressiveness, criminality and even the then socially troublesome playing of jazz music (!) to marijuana smoking. For instance, Harry J. Anslinger, - a Commissioner of the Federal Bureau of Narcotics 1930 – 1962 – once said, “There are 100,000 total marijuana smokers in the US, and most are Negroes, Hispanics, Filipinos, and entertainers. Their Satanic music, jazz, and swing, result from marijuana use. This marijuana causes white women to seek sexual relations with Negroes, entertainers, and any others.” As a result, Marijuana Tax Act of 1937 brought marijuana production under federal control and declared its possession and sale a criminal offense.

More recently, during the 1960s, marijuana smoking became resurgent, especially among college students and hippies. Users perceived marijuana use as a sign of independence and an expression of rebellion against the Vietnamese war, government, and consumer society. Popular singers, rock stars, and counter culture groups used marijuana openly during concerts and other public gatherings.

By the 1990s, more and more states legalized the medical use of marijuana to treat the adverse sequelae associated with cancer treatment, and to manage everything from hepatitis and glaucoma to depression (Grinspoon & Bakalar, 1998). The legalization debates have continued into the 21st century. The laws regarding marijuana are changing daily. As of January 2011, Figure 1 illustrates the US state marijuana laws. 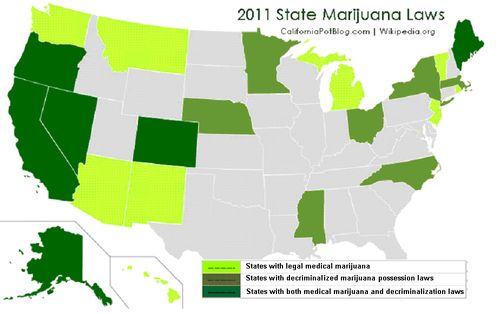 During 1893, the British government Indian Hemp Drug Commission (IHDC) initiated the first attempt to evaluate the physical and mental effects of marijuana, based on an Indian sample. The IHDC had no opportunity to collect reliable and valid data; consequently, its report primarily rested on anecdotal evidence. The general conclusion was that excessive use of marijuana was dangerous, but moderate use was not dangerous. Interestingly, the IHDC did not provide definitions of excessive and moderate marijuana use.

In 1965, Israeli scientists were the first to synthesize the psychoactive substance of marijuana – delta-9- tetrahydrocannabinol. In 1972, The US National Commission on Marijuana and Drug Abuse published a report concluding that smoking marijuana in one's own home should not be a crime. In 1982, the US Institute of Medicine published a benchmark report for understanding the chemistry and pharmacology of marijuana. This report encouraged further research to determine the therapeutic potential of the drug. More recently, clinical trials of the therapeutic effects of marijuana have become more prevalent. Scientific findings support the anti-inflammatory properties of cannabinoids and constituents of the marijuana plant (Tanasescu & Constantinescu, 2010). Researchers have found cannabinoids to be moderately effective in clinical trials to manage symptoms (e.g., pain and tremor) of multiple sclerosis, traumatic brain injury, arthritis, and neuropathic pain (Klein & Newton, 2007).

Posted at 12:22 PM in Addiction & the Humanities | Permalink