The DRAM, Vol. 7(4) – The follies of youth? The relationship between age at alcohol initiation and future alcohol problems.

Adolescent drinking is an important problem in the US. The CDC (2010) estimates that 65% of children under 18 drank alcohol in 2009, with 52% consuming more than 12 drinks per year. But, how dangerous is alcohol to adolescents? Current research suggests that 11-14 year olds are especially vulnerable to physiological and environmental ‘shocks’, including stress and alcohol consumption (Grant & Dawson, 1998). Today’s DRAM reviews a study examining the link between age at alcohol initiation and future drinking problems (Guttmannova et al., 2011).

Figure 1: Odds of adult alcohol dependence versus age at initiation of regular drinking. 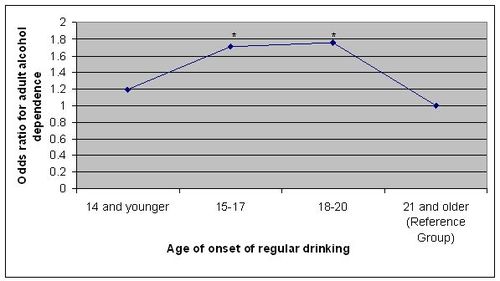 These results do not support the hypothesis that children who initiate drinking from ages 11 through 14 are especially vulnerable to future alcohol problems. Instead, it seems that the initiation of regular drinking at any age from 15 through 21 might predispose children to future alcohol dependence. It is unclear why regular alcohol initiation before age 15 does not significantly elevate the risk for developing alcohol dependence. It is possible that those aged 14 or younger might have fewer drinking opportunities. For example, alcohol might be difficult to acquire and social pressure to drink might be less than for older counterparts. This situation can result in less chance to experience the pleasurable aspects of drinking. Furthermore, early adverse experiences with alcohol might discourage further drinking. This discrepancy between the current study and past work might reflect the retrospective nature of past studies compared to the prospective design of this study. Future research might investigate whether this effect is due to psychological, social, biological or a combination of causes.

Grant, B. F., & Dawson, D. A. (1998). Age of onset of drug use and its association with DSM-IV drug abuse and dependence: Results from the National Longitudinal Alcohol Epidemiologic Study. Journal of Substance Abuse, 10(2), 163-173.

Alcohol addiction is now a days very serious issue not only in US but also many other countries are suffering from this problem. This affects the social health of the country. Alcoholism makes children addicted to such drinks and it affects their health. Alcoholism is when you have signs of physical addiction to alcohol and continue to drink, despite problems with physical health. Many times it is resulted in death.