Fewer than 25% of individuals who are opioid dependent receive addiction treatment (SAMHSA, 2007). Within general medical practices, buprenorphine is a promising tool for the treatment of opioid dependence; this strategy is commonly referred to as office-based opioid treatment (OBOT). However, many physicians cite insufficient nursing support as a barrier to their use of OBOT (Walley et al., 2008). Boston Medical Center has instituted a collaborative care OBOT program that emphasizes collaboration among nurses, physicians, and pharmacists. In this week’s STASH, we review a new study that describes the effectiveness of this program and explores potential patient-level moderators of treatment... Read more →

Posted at 12:00 PM in Science Threads on Addiction, Substance Use, and Health (STASH) | Permalink | Comments (3)

Addiction & the Humanities, Vol. 7(5) – Mission Accomplished? A look at the suggestions laid forth in the Global Commission of Drug Policy report.

The United Nations Global Commission of Drug Policy (GCDP) released a scathing report on the War on Drugs this month. According to the GCDP, an independent group composed mainly of current and former politicians and businessmen, the War on Drugs “has failed, with devastating consequences for individuals and societies around the world” (Global Commission on Drug Policy, 2011, p. 2). In addition to this condemnation, the report also calls for governments to prioritize harm-reduction policies over criminalization and reduction in the supply of illicit drugs. Today’s BASIS reviews research related to some of the suggestions included in the GCDP report.... Read more →

The National Institute on Drug Abuse estimated that people with psychiatric disorders purchase 44 % of the cigarettes sold in the United States (NIDA, 2011). Young adult smokers in particular are more likely to exhibit negative affect and psychiatric disorders (Magid, Colder, Stroud, Nichter, & TERN members, 2009; NIDA, 2011). Interestingly, research has shown that a friendship-like affiliation with cigarettes, among other additional smoking motives, can differentiate between smokers with high and low numbers of depressive symptoms (Vinci, Carrigan, & Copeland, 2010). These researchers recently conducted a study exploring the extent to which such an affiliative attachment to smoking adds... Read more → 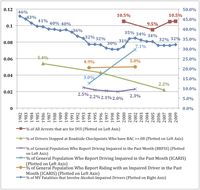 This week, we begin a DRAM series focusing on driving under the influence (DUI). DUI is one of the leading public health threats related to addiction. The Division on Addictions receives funding from the Century Council, bwin Interactive AG, and the National Institutes of Health, among others. The Century Council funding supports our work to develop an assessment tool for use in DUI programs. As part of our work in this project, we have conducted a thorough review of recent research on the development of DUI behavior, its persistence, and effective prevention and intervention tools. The next five issues of... Read more →

Posted at 12:00 PM in The Drinking Report for Addiction Medicine (DRAM) | Permalink | Comments (0)

The WAGER, Vol. 16(5) – Lifetime patterns of gambling and alcohol prevalence

Research suggests that youth are at increased-risk for problem behaviors (e.g., problem gambling and excessive drinking) – See The DRAM, Vol. 7(4) and The WAGER, Vol. 14(7). Although evidence suggests that the phenomenological histories (e.g., use, misuse, and seeking help) that people experience with various expressions of addiction are similar (Shaffer et al., 2004), it is unclear whether the developmental trajectories for problem behaviors are similar. This week, The WAGER reviews an article that compares patterns of gambling and alcohol use to determine prevalence trends across the lifespan (Welte, Barnes, Tidwell, & Hoffman, 2011). Methods Welte et al conducted two... Read more →