Beginning in September 2012, the United States Food and Drug Administration (FDA) will require cigarette companies to include new health warning statements and accompanying graphic images on cigarette packs and advertisements (U.S. Food and Drug Administration, 2011). In a previous Addiction & the Humanities, we reviewed critics’ claims that graphic warning labels, while emotionally impactful, might not be particularly effective in changing behavior. This week’s ASHES reports on a recent study the FDA used to inform their selection of graphic warning images (Nonnemaker, Farrelly, Kamyab, Busey, & Mann, 2010). The FDA designed the study to evaluate the relative efficacy of 36 proposed warning images and used study findings, along with public comments and a scientific literature review, to winnow the 36 proposed images to nine.[1] 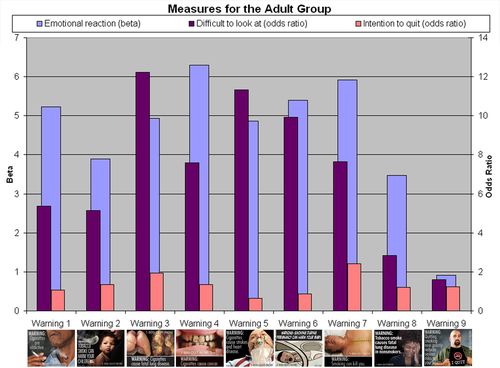 Perhaps most startling about this research is that, although people seem to have strong reactions to the graphics accompanying the warnings, this reaction did not have an effect on their plan to quit smoking. Quitting smoking is a main goal of the new labels (i.e., increase smoking cessation). A population-based longitudinal study measuring actual future smoking behavior before and after the introduction of the new warning labels could be a better indicator of the effectiveness of these materials.

The United States experienced a significant decline in tobacco use during the last 40 years. However, those rates of decline have recently begun to level out. Estimates reveal that 20.6% of adults and 19.5% of students in high school are current smokers (U.S. Department of Health & Human Services). From a public health standpoint, the remaining smokers’ behavior might be the most difficult to change. It will be interesting to see if new warnings have an impact.

[1] Although the study reported about all 36 proposed graphic images to accompany the nine new warning statements, this week’s ASHES only reports about the nine graphic images that were selected. The study also included a young adult smoking group (18-24) (n=4,584) and a group comprised of youth smokers and youth susceptible to smoking (13-17) (n=4,600), as well as other study measures. We only report about the outcomes for the adult smoking group for certain measures.

I Never ever found such edifying blogs.
VAPORS