This week, the DRAM continues its series focusing on driving under the influence (DUI). This is the third of five issues concentrating on the body of recent DUI research. In the first two issues, DRAM Vol. 7(5) and DRAM Vol. 7(6), we addressed DUI-related trends and methods to detect heavy alcohol consumption and recidivism.

Ignition Interlock Devices (IIDs) are gaining rapid popularity among State governments as tools to reduce DUI recidivism. Figure 1 shows the rapid increase in the number of IIDs installed in recent years. An IID is a dashboard-mounted device that requires an operator to provide a breath sample periodically. If the device detects more than a predetermined amount of alcohol, the car’s engine will not start. Today’s DRAM reviews a meta-analysis of 15 studies assessing the effectiveness of IIDs (Elder, Voas, Bierness, Shults, Sleet, Nichols & Compton, 2011).

Figure 1. The rapid increase in the number of IIDs installed (from Elder et al., 2011) 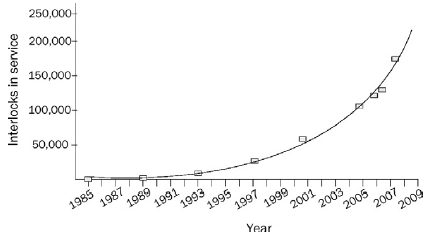 These results suggest that IIDs are an effective tool against future DUI reoffense among recidivist DUI offenders while installed. However, the fact that IIDs are effective only while installed suggests that IIDs do not influence driving habits and behavior in the long-term, but rather reduce offenders’ access to vehicles after drinking. As a result, IIDs should be viewed not as a silver bullet, but as one tool to be used in conjunction with other tools, as part of a comprehensive strategy against DUI.

Posted at 03:10 PM in The Drinking Report for Addiction Medicine (DRAM) | Permalink