« Addiction & the Humanities, Vol. 7(7) - What will it take to WoW them? Does gaming addiction exist? | Main | The WAGER, Vol. 16(8) – Impaired decision making among at-risk young gamblers »

STASH, Vol. 7(8) - Patterns of cocaine use among male and female undergraduates

Recent studies reveal that cocaine use is more prevalent among young adults compared to other user population groups (Substance Abuse and Mental Health Administration (SAMHSA), 2008). Estimates of past-year cocaine use among young adults have steadily increased over the last ten years (Kasperski et al., 2011). However, male and female college students might be different in terms of cocaine use in some important ways.  While some studies cite higher prevalence rates of cocaine use in young males, others cite riskier behavior in female cocaine users, suggesting that young females might be more susceptible than males to developing serious problems with cocaine (Kasperski et al., 2011). This week’s STASH features a study that analyzed gender differences in prevalence of cocaine exposure and actual cocaine use in a longitudinal sample of 1,253 college students.

Results
Gender differences appeared in opportunities to use and patterns of actual usage. 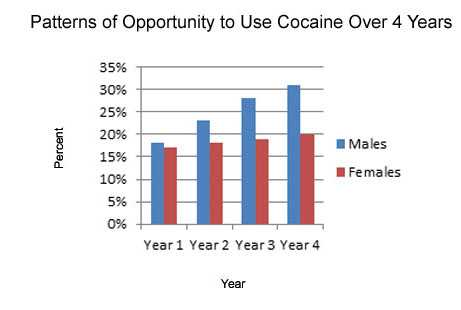 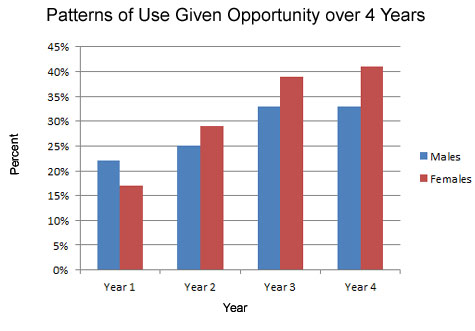 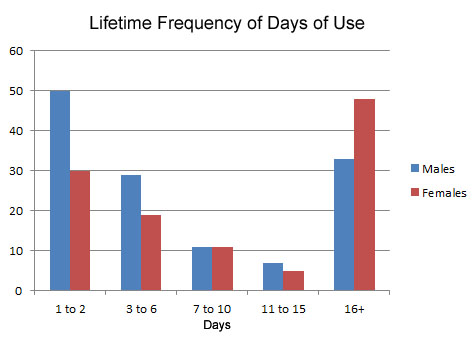 This study’s longitudinal design and high follow-up rate is a strong start for identifying patterns of risky behavior. The results suggest that there are possible gender differences in how college students experience opportunities for use of illicit drugs, in line with previous studies. The results help resolve apparent paradoxes in gender-based patterns of cocaine use. Men reported more opportunities to use cocaine than women. Research that uncovers the settings in which young men typically find opportunities to use cocaine might inform primary prevention efforts. However, among the smaller sample of students who actually used cocaine given the opportunity, there was no significant difference between the two genders. Women who chose to use cocaine used it more frequently and were more likely to meet DSM-IV criteria for dependence. Animal studies have suggested sex differences in endocrine-related cocaine response (Kasperski et al., 2011). Early interventions targeted for women could emphasize these differences by teaching girls about their potential heightened sensitivity to cocaine use. More research remains to be done in specific gender differences in developing substance abuse dependence.

Posted at 02:25 PM in Science Threads on Addiction, Substance Use, and Health (STASH) | Permalink

I think women are more likely to use cocaine for weight control.

#1 -- incorrect use of temporal modifiers. In this case "while" as in "While men were more likely to be presented with opportunities to use cocaine ..." Should be easy enough to change the "whiles" to the correct "although".
#2 -- an 88% survival from year 1 to year 4 deserves a better explanation of the recruitment procedure -- perhaps the school in question is a nunnery.
#3 -- Just a handful of users (10 - 19) and check out the cryptic and hidden bote to Table 1, In every year there were individuals who used cocaine without being given the opportunity to use in that same year;" tough to trust the data.