« The DRAM, Vol. 7(9) - Slipping through the cracks: Underdiagnosis of comorbid mental illness among repeat DUI offenders | Main | Addiction & the Humanities, Vol. 7(9) – Why krokodil, why Russia? »

Although research has shown a decline in the number of people smoking cigarettes in the United States, the annual premature death rate associated with smoking (440,000+) remains a cause for concern (U.S. Department of Health & Human Services). One potential strategy for promoting smoking cessation is to provide many readily accessible options for smokers who wish to quit. This week, ASHES reports on a study that tested the efficacy of a smoking cessation program delivered via video messages for cellular phones (cell phone) (Whittaker et al., 2011). 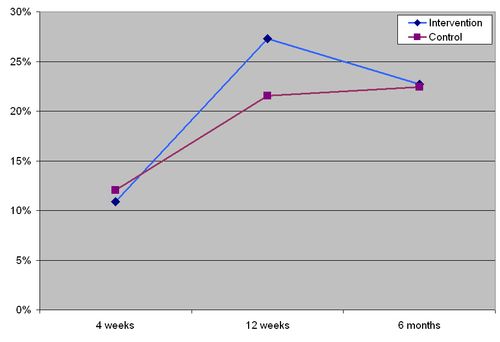 The results indicate that a more personalized smoking cessation video messaging system with additional resources was not more effective at helping people achieve abstinence than an automated video messaging system. It is unclear if this type of intervention is effective, and it is impossible to interpret these null findings. In this instance, it might be that the intervention was not successful, or that the selection of participants and low participation rate might be responsible or other methodological problems might be responsible for the absence of significant results.

However, video and text messaging intervention programs might hold promise because most people carry their cell phones with them at all times and this type of system could allow for intervention at any time and potentially when it is needed the most. Future research should test the efficacy of this type of intervention among different populations, age groups, and addictions (e.g., gambling, substance use, drinking).

1The video messages were a diary of role models who shared their difficulties, techniques, and strategies for quitting.